My friend, Jim, and I pulled into the Electric Factory parking lot around 7PM, about an hour before the show began. He’d heard that the show was sold out, so we wanted to make sure that a parking spot was claimed and that neither of us would have to stand in line for too long. After the necessary pat down and ticket rip, the both of us walked into the club while there was still breathing room, took a quick peek at the merch table and found our spots on the venue floor about fifteen feet from the stage.

Around us you could see there were older moms and dads that probably got to see Nick Cave in his prime, young Gothic girls whose supple cups were plentiful and overflowing thanks to the magic of corsetry and guys clad in suits paying homage to Mr. Cave himself. Then you had people like me that fit with the t-shirt and jeans crowd, just there to see a show. Clear Dixie cups glowing with amber froth were the night’s accessory and forewarned of wasted jerk-offs to deal with later on. 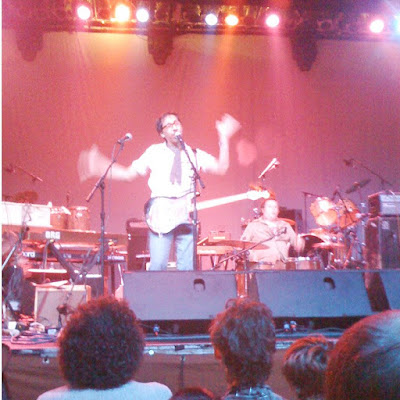 It was 8PM when Kid Congo Powers and crew hit the stage, tortured for the first few minutes of their set with deafening feedback and a strange issue with the drummer’s mic, which made his snare drum sound like popping corn. Within five minutes, the issues seemed sorted out and the band opened with an instrumental version of Gun Club’s “Mother Of Earth,” much to my delight.

Kid Congo was charmingly flamboyant and very engaged with the crowd. His neck ornately decorated with a navy blue cravat, Congo was a mostly occasional vocalist, many times speaking choice phrases into the microphone like he was participating in some half-assed high school poetry reading. The Pink Monkey Birds, comprised of one mighty bass player, an illustrated drummer and a guitar/sampler tech who remained faceless as he was seated behind his equipment, married some maniacal Link Wray surf with the rockabilly of the Gun Club and The Cramps, (all of which makes sense because Congo, at one time or another, was in both Gun Club and The Cramps). Overall, Congo had an interesting eccentricity that worked its way through his guitar playing and certainly through his stage presence. At one point, he covered a Bo Diddley track, respectfully referring to him as our “black gladiator.”

Congo’s show with The Pink Monkey Birds was more or less an introduction for me, so the only money I spent the entire night was for one of his CDs. 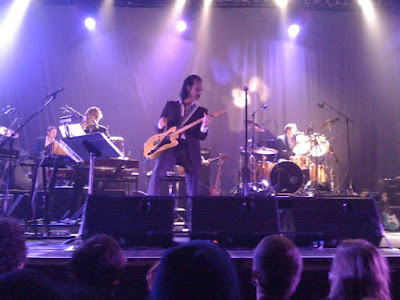 It was 9PM when the Bad Seeds began to file out onto the stage, looking relatively proper and well dressed, albeit suspicious looking like a group of subversive English profs. The stage was a veritable obstacle course of instruments: two drum sets at the rear with a congested grouping of three or four moog/organ/synthesizers and a music stand holding a rather haphazard stack of pages. Violinist Warren Ellis hung out at the right of the stage, enjoying the only real available space. 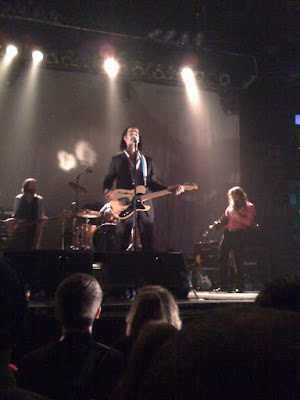 By this time, the floor was packed and people were moving ahead to fill any and all available slots much to my 5,’ 5” dismay. When Nick Cave came out, looking like 9 feet of tailored, black, pin striped evil, the band went into ballad mode with “Hold On To Yourself.” Bassist, Martyn Casey’s low end reverberated through the venue and climbed up into our collective chest cavities so as to give our hearts a good squeeze. Crowd response was at an all time hypnotized. 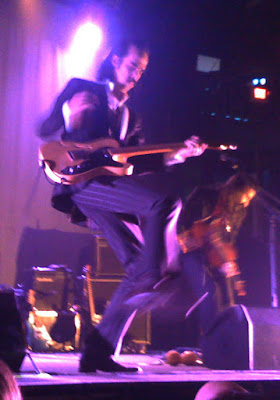 Minutes after the set began, I became very aware of the 6’ Alterna-refugee whose concepts of personal space were non-existent. His lanky, inconsiderate ass was persistently backing into me, stepping on my feet and basically being a dick. And, my typically non-confrontational self had to tell the guy a couple times to knock it the fuck off. He didn’t. So, in order to keep from wasting ticket money by getting myself, and my friend, violently escorted off the premises by some meathead with SECURITY silk screened to his steroid-addled carcass, I managed to worm my way to his side, only getting bumped into occasionally as opposed to being backed into. He remained, for the entirety of Cave’s set, a problem.

Onstage, Cave is the most clumsy and awkward demon I’ve ever seen. He has a remarkably energetic persona, sexually sly and intellectually frightening. More than a few times, he managed to get his microphone cord wrapped around the stand, angrily pulling at it when he would lose slack. Somehow, he kept his mojo intact. At one point, his foot shot up underneath one of the organs, knocking it off its cradle and scattering his stack of music all over the stage floor. Roadies frantically ran out, visibly cursing his name, and put everything back in order as quick as possible while he jumped around, performance on point. Early in the set, Cave mentioned to the audience that the band was going to move to the U.S.,” because everything is going so well here.” Hey, things aren’t so bad your audience couldn’t spend $45 to see you. Be thankful.

Most of the band’s material revolved around the Dig!!! Lazarus, Dig!!! LP, but they did tear through some of their older music, most notably a scorching rendition of “The Mercy Seat,” and a topically adjusted version of “Oh Mama,” (“Obama” wound up the crowd’s refrain). “Tupelo,” “The Weeping Song,” “Red Right Hand;” with every song, the crowd got more and more reactive and the music seemed to get louder and louder. 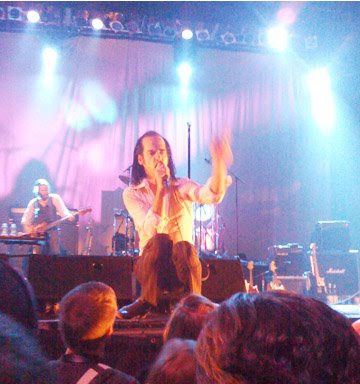 Once their already mind-blowing and exhausting set was finished, the group stepped back out for a group of three encores that ended with a brutal, fucking BRUTAL, performance of “Stagger Lee.” Holy shit! To witness a group of somewhat civilized looking 50-somethings come out and pummel the song into the souls of their onlookers was both humbling and incredible. At the point when demands are made upon Cave’s member, or when Cave blurts, “Suck my dick,” the music stopped for a while, long enough for a group of Goth-mamas to express their desire for Cave’s, ahem, bad seed. He looked their way for what felt like ten minutes, probably making his backstage coital selections, or just soaking up the attention. Answering, Cave strategically hung his microphone in the most obvious of places and scored a massive group response. Finishing up the song, The Bad Seeds sucked out any and all energy from the crowd. The band quietly and tiredly exited and it was okay with us.

Amidst a feedback buzzing in my head, I got to see Mr. Bumpy bump into the wrong guy one time too many and almost get his ass handed to him. I guess a fight would’ve been an interesting note to leave on, but the show itself was violent enough. After putting some money in Kid Congo’s pocket, Jim and I took off and made our way through the parking lot of secondhand Djarum smoke and smiling black lipstick. 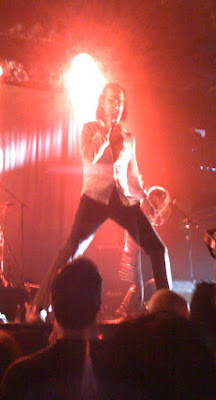 Hold On To Yourself
Dig, Lazarus, Dig!!!
Tupelo
The Weeping Song
Red Right Hand
Midnight Man
Love Letter
Into My Arms
The Mercy Seat
Moonland
Deanna
We Call Upon the Author
Papa Won't Leave You, Henry
--Encores--
Hard On for Love
The Lyre of Orpheus
Stagger Lee

P.S.--Thanks for the photos, Jim.
concerts

Unknown said…
No problem for the photos. Sorry I couldnt supply you with anything better than iPhone pics. Next time, get me a press pass, i'll come armed with something a little better! :)
10/09/2008 11:02 AM

The photos were great, so thanks again. As far as that song goes, "oops." I thought I researched well enough.

Yes, it certainly was a great show and thanks for reading. Appreciate it.

I would love to hear some Birthday Party bootlegs. What's your email address?