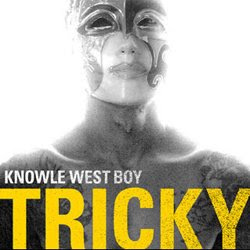 Certain groups, performers, bands…some of them maintain my loyalty long after they’ve begun to fall apart. I’ll know as I pick up their new CD, scanning the back for song titles, maybe even checking out what label decided to throw caution to the wind to see if anything salvageable could still be squeezed from this one-time “artist,” that I’m wasting money. But, I can’t help it. I walk up to the counter, CD in hand and shell out my hard-earned. Minutes into the CD, it’s already up for resell at some indie record store and I’m cursing my impulse.

Tricky is one of those performers. Ever since Maxinquaye graced my ears, I’ve willingly gambled money away in terms of his recent output. 2003’s Vulnerable still makes me want to purge every breakfast, lunch, dinner or midday snack I’ve ingested since I hit PLAY on that piece of shit, and I’ve long since exchanged it for something more worthwhile. But, Knowle West Boy stared at me and I figured, “I’ll give him another chance.”

Well, I will say this: It beats Vulnerable’s ass so it does have that going for it. But, keeping in mind how little Tricky actually had to do to accomplish that, Knowle West Boy still isn’t that great.

Taking its name from Tricky’s Bristol neighborhood, Knowle West Boy is a testament to disorganized ambition and eclecticism. Listening to it, it’s abundantly clear Tricky’s desire for relevance in the new millennium, as his trailblazing days were long ago, but tightened and sanitized production does him no favors. As fast-paced and immediate as the Specials-inspired “Council Estate” sounds, it’s nowhere near as dirty as it should be. It’s as if the childhood memories of the place the album attaches itself to, suffer from being Pro-Tool’d as well.

Beginning with the lounge flavored “Puppy Toy,” Tricky hits us immediately with loud beats and the exerted lungpower of his female flavor-of-the-song, Alex Mills. He fares well at exuding the raspy barfly characterizations, choosing to gratingly whisper his output while Mills sporadically hits him with lines like ”Can you get me that drink?” “You think you’re nice,” “Got any cash?” It’s not a bad opener, and leads into the more subdued and Jamaican-tinged, “Bacative,” an interestingly worked and atmospheric number that stands out as one of the album’s primary successes. “Subdued” is brought to “pretty” with the very personal and introspective “Joseph” and then strangely turns “I Will Survive” with Veronika Coassolo’s determined “Veronika,” an Atari drumbeat being the song’s only backdrop.

As much as Tricky would like to think otherwise, he’s most adept at crafting anything dark or mysterious. “Past Mistake,” with its enveloping beat and ghostly piano, is one of the album’s more sorrowfully sublime moments. “Coalition,” a strangely conceived and minimal collision of cranking bass thuds, break-beats and stringed instruments, acts as some stream-of-consciousness state of Tricky’s (and the world’s) union. And, exhibiting Tricky’s gift for writing lush, feminine harmonies, “Cross To Bear” is a gorgeous bit of symphonic Trip-Hop.

For as many highpoints as Knowle West Boy boasts, though, it makes some very bad decisions. The cliché dance rock of “C’mon Baby” is empty, underwhelming and fails at providing the album with any strength. Similarly, “Council Estate” poises for attack but winds up sterile and over-reliant on its flat production. “Slow” embarrassingly mixes Bobby Brown’s vocal inflections overtop a backdrop that owes itself to C+C Music Factory. “Baligaga,” in an effort to revisit its already utilized Jamaican motif, takes an unfortunate step backward from “Bacative.” And “Far Away” dials up the glam rock guitar and comes up with a genuinely plastic 80s dance jam.

The album’s low points diminish whatever value it might have, which is unfortunate because Knowle West Boy does exhibit some of the best songwriting Tricky’s done so far this decade. His last song, the Country/Bluesy and autobiographical “School Gates,” a song about a pregnant 15-year old girl, provides the album a very heartfelt outro. It winds up somewhat wasted, though; a casualty of an over-thought attempt at artistic redemption. At least he’s improving.