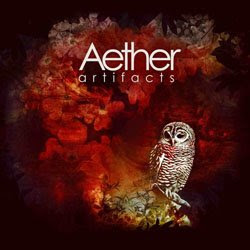 There was a point in time when hip-hop’s sound pioneers understood music the same way musicians understand it. Not an observation that holds too much water in mainstream hip-hop these days it seems, as producers/beatmeisters on MTV rotation are happy enough to tweak a knob or two and get away with mediocrity.

I admit to approaching Aether, a.k.a. Diego Chavez, with the same cynicism that led me to write the above observation. I was happily surprised.

Artifacts, Aether’s solo debut, is built upon old school aesthetics, meaning that it has substance, it has weight, it has the power to move and mesmerize. Piano, Latin-flavored guitar notes, mostly rugged beats and sampled vocal loops, sort of evokes The RZA in his prime, back when Wu-Tang were still nuttin’ ta fuck wit.’

His mixture of traditional boom-bap (“To Her”), smooth soul (“It Was”) and even pop rock (The Moody Blues melody of “Autumn Pisces”) seems to maintain a characteristic aura that glazes every track like an atmospheric brand. He strays here and there with the electro-pop of “Orfeu Negro” and the Biggie-flavored, “Forgive Me,” but he mostly keep his mood in place. The beautiful and somber “Variance” and effectively layered “Makeshift Sanctuary” act as album highpoints, providing pay-offs to anything before, after or in-between.