Don’t Listen to Brian Wilson On A Bad Day… 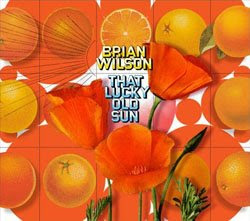 Love letter to L.A. Whatever.

Cubicle bound on a cold and grey December afternoon, confronted with an infuriatingly long commute amidst an abundance of retail-hungry Christmas shoppers keeping me frozen in a line of traffic, keeping me from going home, Brian Wilson’s latest foray into California rock operatic cuteness, The Lucky Old Sun, is tantamount to a denture-impediment of a “nyah nyah.”

Is it somewhat of a slap in the face that Wilson morphed a 1949 blues song, (originally written by Beasley Smith and Haven Gillespie), perfectly illustrating the desire to be anyone, or anything, else in the face of backbreaking hardship, into this ridiculously upbeat ode to Los Angeles, interspersing reprise after reprise before and following banally conceived spoken word narratives and otherwise inconsequential and sentimental crap? Think SMiLE II, with emphasis on the “II:” an unrealized attempt at duplicating a masterpiece.

Trailer for the release of That Lucky Old Sun

Being been brought back to his old home at Capitol Records, Wilson, with the aid of Van Dyke Parks (co-conspirator for SMiLE) and Scott Bennett, his conceptually epic outlook now constant thanks to his success with 2004’s SMiLE, basically looks back at life before his mental shutdown and spews. That Lucky Old Sun has the feel good reminiscence of those days when it was all about surfer girls and sunshine, before Wilson became a frustrated arteeest.

Granted Wilson’s dependable in the harmony department, the choral aspects always on point. His band? They’re definitely a competent unit, able to layer the small and the large, crafting those minute details into the mix with imagination and flair. So, what’s my problem? It’s the sentimentality. Honestly, Wilson’s upbeat ambition is as acidic as the oranges that overwork the album’s almost unreadable cover. Something as “Summer, sixety-one…” as “Forever She’ll Be My Surfer Girl,” is a regression for Wilson, a corny pop song being worked into a format that calls for something more progressive. “Oxygen to the Brain,” more of a one-man Broadway show tune full of life lessons, is likely an honest portrayal of Wilson’s many ups and downs and his gratitude for being alive. But, the cynic in me hears the following: “Ready steady, California/I'm fillin' up my lungs again/And breathin' life.” And thinks this: “Breathing life in California? With all that smog?”

“Going Home.” “Southern California.” It’s possible that something as personally triumphant and over literal as The Lucky Old Sun is lost on me because its content feels too simplified to appreciate. SMiLE’s biggest strength, admittedly, was its story: its almost 40 years as an unfinished byproduct of Wilson’s legend. But, the album itself was a full-fledged and brilliantly realized piece of American music history and an important milestone. That being said, SMiLE being Wilson’s ACTUAL victory, That Lucky Old Sun feels unnecessary, especially when its California-centric narratives interrupt its flow:

“Venice Beach is poppin.’ Like live shrimp dropped on a hot wok.”

The Van Dyke Parks-written interludes, possibly meant to aid in Wilson’s endeavors to LOVE his native state, are ultimately what kills the album’s credibility. Evidently, the road to California is paved with good intentions.