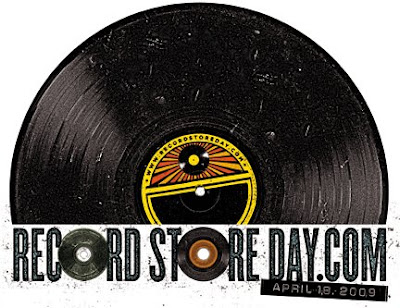 Attempting to bolster support for indie record stores on this year’s Record Store Day, some special treats are being released for the occasion. Out of the multitude, these are at the top of my list:

Sonic Youth & Beck split 7” —
Matador Records is putting out some specialized releases, but this one in particular features Sonic Youth and Beck covering each others’ songs. Thurston Moore and Co. are performing Mellow Gold’s “Pay No Mind” and Beck will be putting a spin on EVOL’s “Green Light.”

Tom Waits Live from the Glitter & Doom Tour 2008 7” —
I’ve been trying to get the details straight on this one, but there’s no actual information on Waits’ label, ANTI. This is either a live split 7” with Lucinda Williams, or Waits performs “Lucinda” live.


Rhino 7”s —
I can’t find a direct source for this information, but the Interwebs are stating that Rhino records is putting out the following:


There’s also rumors of an Elvis Costello/Jenny Lewis 7” and Domino Records is apparently putting out a vinyl-only compilation called, Blood On The Tracks, but I couldn’t find any direct source for confirmation. I guess news of these exclusive releases is being kept light due to the influx of record-shoppers that will be out on 4/18, tongues wagging, green blazing and fists flying. I think they’ll probably be available online that day as well, so the labels probably want to keep pre-orders to a minimum.

I’m realistic enough to know that I’ll be lucky to get at least ONE of any of these.

Sincerely,
Letters From A Tapehead
record store day shopping for records to whom it may interest upcoming releases

however, from what i understand, they are only going to be in the UK, and it's something like 500 lmtd. ed.

georg said…
elvis costello is also releasing the first single from his new album on 4/18, a recording of 'complicated shadows' backed with non-album b-side 'dirty rotten shame'. i think it'll be available in the US, but i'm not sure.

unfortunately, i think i might be in winthrop, massachusetts that day, so if i can't find a record store, i'm so driving to boston.

Keep your eyes peeled for online availability for those Waits 7s. I'm pretty sure ANTI is putting them out.

You know I care and you're correct. Have fun is Massachusetts.

Anonymous said…
I really would love the waits, beck/sy split (pay no mind is a great tune/ and that janes 7". I'm pumped for 4/18 sean.