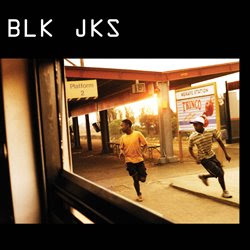 As of the last three or four days, it’s been the waves of vocal harmony that wash over BLK JKS single, “Lakeside,” that’s occupied my mind, a sound to defeat all sounds. Pairing tragedy with momentary breaks into joy, “Lakeside” demonstrates the rock n’ dub capabilities of the South African quartet, an impressive combination of reggae bounce and rock fury. Guitarist Mpumi Mcata passionately strangles his guitar strings like a pre-Rob Thomas Santana over drummer Tshepang Ramoba’s hyped sticks, singer Linda Buthelezi the storyteller.

The four-song Mystery EP is as impressive a debut as any packed LP that’s come out in the last year, exhibiting a band with a unique grasp of harmonic and noise possibilities. Some may hear TV On The Radio, but who cares? From passion comes creation, the album’s title track an explosion of unplaced tempo and expansive freeform dub-rock jamming (Molefi Makananise’s overstated bass its only real reliability); too beautiful to be maddening, too unsettling to easily accept.

Video for “Lakeside”
Buthelezi is soulful and it helps that his band plays with range that isn't so much identifiable as it is adventurous, conviction in both their cultural embrace and day-to-day lamentations. The pleasantly danceable “Summertime” abruptly transitions into scattershot percussion, its tone almost Arabic as the music grows, swells, heightens, Buthelezi’s singing transitioning to reverberating wails. Closing song, “It’s In Every Thing You’ll See,” is the desert spiritual of the album, almost a lonesome cowboy of a guitar song riddled with echoed strings.

BLK JKS communicates a lot with four songs, Mystery owning its roots while reaching beyond the Mediterranean: world music for the world. A really good album from an exceptional band.