By now, I’m sure I’ve annoyed the shit out of you with my incessant ramblings about the current trials of the independent record store and the devaluing of music through technological “advancement.” If that’s the case, I apologize, (kind of). If not, I’ll tell you how I spent this year’s Record Store Day.

First off, I’ll admit that I was expecting more of an “event.” Deciding to spend my sunny Saturday around the vicinity of A.K.A. Music, I awoke in anticipation around 8AM. I’d rallied some of my friends together to meet up for the occasion, picking up my brother before heading over to Olde City, armed with a wad of cash, a full tank of gas and a 20 oz. of Wawa coffee. 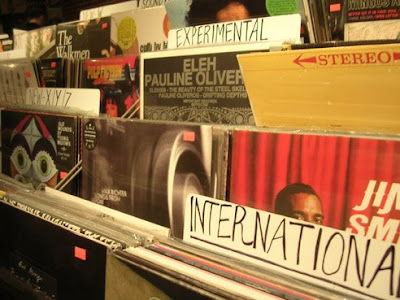 Around 10AM, the store looked deserted… at least, from the outside. Realizing we weren’t missing anything, we decided to get some lunch and basically kept an eye out for any tents or local bands setting up.

11AM, it still looked pretty empty… once again, from the outside. Walking in was a different story. 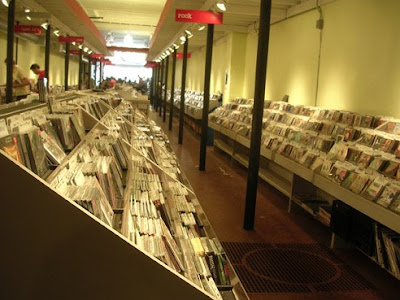 The exclusives for the day were shelved past the register, staked out by a gang of eager salivating Radiohead fans awaiting the availability of all those Capitol EPs. All of them were already weighed down by the day’s selections, Radiohead being the prime pickin.’ I pulled a Moses, parting the sea of Yorke-thusiasts and zeroed in on my picks. I nabbed the Sonic Youth/Beck split 7,” the Jay Reatard/Sonic Youth split and the Tom Waits Glitter 7.” I decided against the Jesus Lizard set, figuring my money might be better spent elsewhere. Besides, I’d only just arrived and wanted to make a day of shopping around. 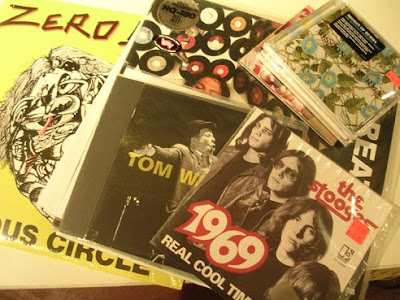 Shopping wasn’t too difficult. The exclusives attracted shoppers like Brundle Fly to raw sugar, but a lot of those shoppers failed to breach the imagined boundary that led to the rest of the store, a perpetual line to the register comprised of prize hounds.

As noon approached, more people began to filter past the line. By then, I’d easily spent a hundred bucks. Clutching my wish list like Bob Dole’s pencil, I was in a constant state of “brain fart,” forgetting within seconds of setting out for something in particular what it was I was looking for, the price of being easily distracted by the plethora of available music in sight. Record store A.D.D. is an ailment, which is why I now always keep a list.

In my hands were the following: 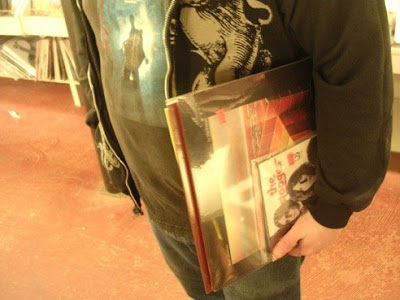 And, of course there was more to get, but I suddenly felt the tension of restraint. I switched out the Vivian Girls for a Stooges 7,” figuring I’d spend a little less. After a couple more light surveys of the store, I decided to take a spot in the perpetual line and found Koenji Hyakkkei’s Nivraym in the new releases. THAT was my last purchase for the day.

As the cashier filed through my selections, I regrettably decided to abandon the DNA LP, thinking that I’d already spent too much loot. My brother told me I’d regret it, and he was right: I’m kicking myself as I type this. Thankfully, I found a copy online, so at least it’s still within reach.

The rest of the day was spent with coffee or beer in hand, music-based discussions passing the hours until it was time to hit the Schuylkill. 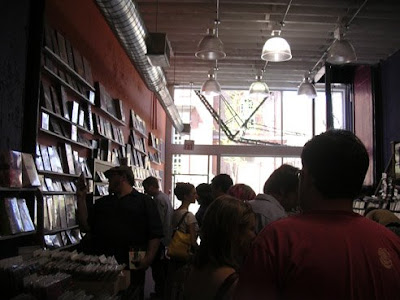 As an excuse to support my favorite record store, Record Store Day was a good time. I do however wish that A.K.A., in light of their patrons coming out in droves to support them, had invested more energy and treated the occasion like an actual celebration. The store’s owner and employees seemed contented enough to just stock the exclusives and sell records, no real enticements for first-time patrons or connectivity with their public. Other record stores around the country seemed to embrace the opportunity to grab people’s attentions, brining live music, discounts and swag, drawing in the crowds and spitting out happy customers. Why not for the best independent store in Philadelphia? 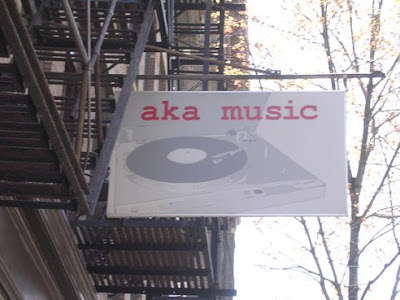 Having said that, it was nice to take a few names off my wish list and bring home something new for my turntable to feed upon. Already looking forward to next year, but I might spend it elsewhere.

Sincerely,
Letters From A Tapehead
record store day shopping for records to whom it may interest

Anonymous said…
DNA is well on it's way to being sold out. Get it soon because it won't be repressed!

Sean Caldwell said…
And the album's in the mail.

Thank you, No More Records.