“Our Present Was Empty/Our History A Mess:” Pop Punk at an Evolutionary and Devolutionary Level 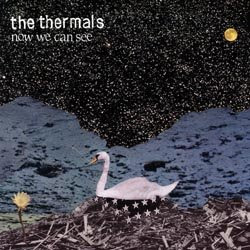 The Thermals
Now We Can See
Kill Rock Stars
Released: 4.7.09

Sometimes I don't mind “fun” being injected into music. Like everything, it just has to be done right. The anthemic joyfulness that pervades Now We Can See, fourth album from Portland pop punk trio, The Thermals, is undeniably infectious, catchy to the point of necessary and involuntary physical movement. With no conscious effort on your part, your foot taps, your head nods, your fingers drum… you just can’t help it.

Though typically and vehemently opposed to anything remotely pop punk, (feigning distrust of government, authority and conformity while sounding as controversial or dangerous as a clean napkin), I can get behind The Thermals, specifically because they don’t disguise what they do with any hint of rebellion, unless you consider the album’s evolutionary bent a blasphemous smiting of your possible creationist belief system. As singer Hutch Harris loses his spine in order to turn fishlike and water dwelling for the track “When I Died,” it’s difficult for me to remember any other time in my life when I rocked out to a song like this, an almost “Rockaway Beach” excitement applied to the survival based instinct of a newly aquatic organism: “The Earth was too hot/The air was too thin/I took off my clothes/I took off my skin/I crawled to the sea that was calling for me/So I could swim... Yeah, so I could swim!”

Kevin Costner grew gills, Michael Phelps won a shitload of gold medals… maybe this is where we’re headed: ocean bound, our skin meant to melt back into its primordial state, a gelatinous civilization underwater, struggling to develop its legs and feet and learn again its fundamental need to communicate and invent; a veritable bubble wrap field of once-human jellyfish, pulsating functionally and waiting to start all over again.

Playing up the death/reincarnation/evolution/devolution scenarios like some fucked up Stephen Hawking meets Stanley Kubrick interpretation of General Hospital, The Thermals express their thematic content with a full and polished energy, low end and percussion gloriously ringing out a clarity that resembles Steve Albini’s un-produced results. The album’s song titles read memoir-like and instructional, (“I Let It Go,” “When We Were Alive,” “You Dissolve”), Harris and one-woman rhythm section Kathy Foster, (drummer Westin Glass joined soon after recording was finalized), communicating with a barrage of loud melody that brims with sufficient post-grunge mud to keep the mix from sounding TOO clean.

Now We Can See’s make-up is mostly the same throughout: quick and free of embellishment; the power trio relying on the sum of its own parts. The Thermals manage to sound mostly uniform whether they’re fast (“When We Were Alive”), or slow (“At the Bottom of the Sea”), up until their successive double shot deviations to dorkdom, “Liquid In, Liquid Out” and “How We Fade,” both of which seemingly owe something to a possible diet of Rivers Cuomo and Ben Folds.

If I could pick a singular moment where Now We Can See pulls me in, it would be the second Foster’s low end kicks up the volume in “I Called Out Your Name.” A slinky thud of a bass line, Spector-ized and thick, the song begs you to drown in its groove, standing out in an album that’s already very attentive to rhythm and hook and simplified enough to focus on its attack.

The Thermals do “basic” very well and give “catchy” music some credibility. As strange as it reads on paper: a band harmoniously belting out fist pumping pop anthems about bacteria (“We Were Sick”) or the beginnings of mankind (“Now We Can See”), it sounds good on wax.