- June 09, 2009
The first few seconds of static are interrupted for almost ten minutes after you drop the needle. Bassist Kira Roessler fastens the foundation in a series of repeated thumps as drummer, Bill Stevenson, chimes in with warm up percussion before he finds his place, crash symbol spark showers falling on guitarist Greg Ginn, who winds up his six-strings and lets loose a tunnel of mechanic mayhem that you can essentially drown in.

What you have is “Your Last Affront,” the first song on Black Flag’s instrumental EP, The Process Of Weeding Out. 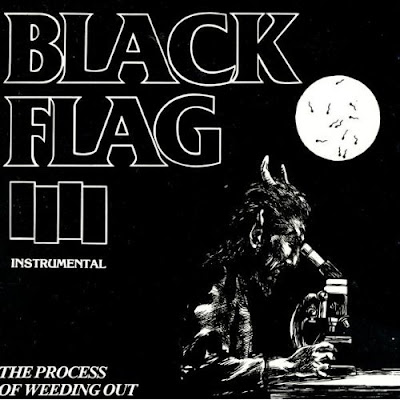 As far as Black Flag records are concerned, people don't look past Damaged as it is widely considered the band’s milestone. But, speaking as a fan, Black Flag made no album more complex or extreme than The Process Of Weeding Out, its combined energy, inorganic make-up and strangely amateurish experimentalism a troubling and unsettling byproduct of Ginn’s dissatisfaction with scenester-ism.

The Process Of Weeding Out was, in all honesty, one of the first examples of hardcore’s intent for progression. Punk in general back in ’85 had been evolving with no wave, new wave and post-punk, the first wavers and their progeny creating music influential enough to facilitate a huge portion of this decade's indie output. Hardcore didn’t want to grow up, but its progenitors couldn’t really go anywhere without exploring new territory, and though the hippie generations were widely mocked for folding under societal pressure and ultimately conforming, the hardcore scene was itself becoming a clique whose ideals of individuality, self-expression and rebellion had scene-instilled constraints. The open-minded became the close-minded, hence the almost offensive nature of a hardcore band creating something “artistic.”

To listen to “Your Last Affront,” realize that there is no music more hardcore, challenging or potentially revolutionary than jazz music. What Ginn did with guitar, Ayler had done with a sax. As the sonic barrages shift and contort, free form atonal improv over Kira’s unwavering and militaristically disciplined pattern, Stevenson pulling Rashied Ali at times, seeing how far he can deviate from the plot, one can almost hear the shock of the ye olde jazz crowds back when structure began to melt away as the playing of Ornette Coleman and John Coltrane took less shape. It’s possible that the same shock was felt and heard from the collective of disillusioned and malcontented hardcore youth; children convinced to be different, though put-off by a band so set against the grain that they confused the paradigm. You don’t get more hardcore than that.