Boris Put Out Some Singles and Make Some Hits… 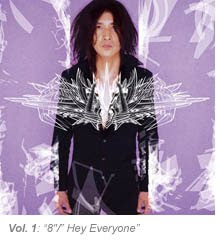 It’s actually not too off-putting that Boris decided to dub their new series of 7” releases as “hits.” The Japanese drone trio has tapped into the manufactured mainstream to come up with their own variation on the pop genre while utilizing a “singles” format. They combine 80s hair metal, glam rock, somber chick rock and then bookend it with the more familiar aspects of their sound. The word “heavy” is included for a reason, as this 3 part series isn’t meant to abandon the brand of sludge that Boris is typically known for, just take it somewhere else for a little while.

Though 2008’s Smile made the mistake of allowing their signature mire to obscure what was going on musically, Boris was at the same time positioning themselves to do more than just make loud noises. Although 2005’s Pink had already communicated a fondness for genre hopping, Smile was a cut-‘n-paste noise collage, emotionally drawn out and abrasive when necessary. Japanese Heavy Rock Hits seems a culmination of the two, though humorously kitschy at points. How can you listen to something as overtly “metal” as “H.M.A. (Heavy Metal Addict)” and not appreciate its super-fast Van Halen soloing and clap-a-long rock riffs?

Obviously, the most remarkable aspect of this release is its format: Two songs per 7,” released a month at a time. In the same way music was once sold in a market dominated by singles, Boris take the old model out for a test spin just to see if there are enough music fans out there willing to indulge them. 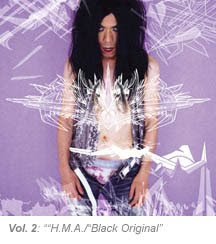 Vol. 1 starts off with “8,” somewhat of an “emo,” My Bloody Valentine-tinged soul rocker, mostly demonstrative of the familiar noise rock they’ve committed to Pink and Smile. Its B-side, “Hey Everyone” almost has a “Dancing In The Streets” flair to it, the song’s pop make-up carried as far as a band like Boris can take it without betraying their otherwise dark sensibilities.

They flirt with accessibility for the Hits series, not only in a mock-worthy sense, (“H.M.A.”), but in terms of song structure and instruments as well. Vol. 2’s “Black Original” is damn near Prince in a way that makes you forget who you’re listening to. It’s almost voyeuristic for them to attempt to incorporate their sound into something so obvious, as if they’re imagining what it’s like to have mainstream presence. In that sense, Hits works as a concept, an attempt at commercializing a non-commercial band and seeing how far they can go. They even go a little Lilith Fair with Vol. 3, guitarist Wata given an opportunity to play the sad chick for “16:47:52...” 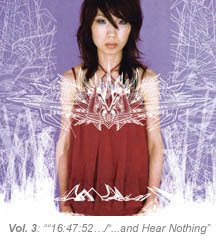 But, you can’t expect Boris to release anything without at least one ethereal drone track, Vol. 3’s B-side, “…and Hear Nothing,” a slow and enveloping piece of sonic gloom that only brings them back to established territory.

As open to change as they continually express, Boris, at its core, is a monster of a power trio and Japanese Heavy Rock Hits is another step in their perpetual evolution and expansion. Though Hits inadvertently cements Boris’s standing as a powerhouse that will never have commercial viability, (irony is alive and well), it also points out the flimsiness of modern pop and how well it can be appropriated. This sort of exploration is in a vein similar to Mike Patton’s Peeping Tom project, his own efforts to fuse pop aesthetics with underground integrity generating fascinating results and making one wonder why pop music has to suck so bad. Is it really that hard to make good music that the general public can agree upon? As the singles market once drove radio and as mass market consumption once fueled some of the best music ever committed to LP, what exactly happened to pop music? When did become the unlistenable mass of trite and mediocre airwave puss that it is today?

These questions beg answers, but in another venue. Boris, in the meantime, is still a band to be taken seriously. Luckily, they don’t take themselves so seriously.