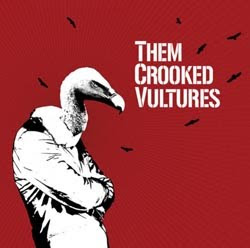 There are times when actions beg questioning, even if you do appreciate the outcome. With Them Crooked Vultures, the supergroup venture joining Queens of the Stone Age singer/guitarist, Josh Homme, Foo Fighter Dave Grohl, and Led Zeppelin bassist, John Paul Jones, the possibilities alone seem so exciting. But, what’s the motivation behind joining three generations of musicians into what could ultimately be seen as a marketing ploy with rock roots? Even listening to the album you get the sense that Homme could’ve turned most of this material into a new Queens album as his characteristic falsetto and off-kilter riffs dominate most of the music and don’t necessarily aid in the development of anything particularly new.

Grohl seems to be a draw, a re-tapped mainstream presence that gave the Queens the visibility they needed to put Songs For The Deaf in peoples’ hands.

Jones? In the 90s, his involvement might’ve meant more. Now? Nirvana is seen as Zeppelin was back then, loud and proud “parent music” that made biological caretakers seem kind of cool back when the rebel yells were fueled by post-punk and 70s nostalgia. So, for those of us in our thirties and up, Jones is a salivary factor.

Them Crooked Vultures, to put it bluntly, is a cross-appeal bit of marketing genius that a record label can get behind, a thing that makes you go, “Hmmmmmm…” Who would pass this up, if not for the sake of pure curiosity? Well, to rephrase, what “music fan” would pretend not to care?

But, you can wax “marketability” and “musical capitalism” all you want. Bottom line about Them Crooked Vultures: Their frontman is one of the most crucial figures in mainstream rock music, one of the few with credibility, respect and vision; their drummer, while somewhat of a generational answer to Don Henley, has fashioned himself a nice post-Nirvana career from the ashes of an epic implosion that would’ve left lesser men, well… depressed or headless; and their bassist is a legend, and now one of the few post-Zeps that’s done something more worthwhile than team up with David Coverdale or over-schmaltz “Sea Of Love.” If Them Crooked Vultures was approached from a marketing standpoint, at least they made something that sounds good and seems like a step forward.

Even though Homme’s presence laces the album with unmistakable Stone Age traits, there are attempts to incorporate the sounds of a more Brit blues persuasion. Learned blues-ish tone starts the album off with “No One Loves Me & Neither Do I,” lines like “Don’t hold it against me unless it gets hard” sort of providing the album its “Lemon Song” metaphor and stylish sexuality. In this way, the Zeppelin influence is beneath the album’s surface, coaxing out its Plant-ish “ah, ah, ah, ahhhhh” through the slow, rhythmic movement of the song’s midway breakdown. More broadened is the Foo Fight of “Mind Eraser, No Chaser,” its accessibility single-friendly when compared to “New Fang,” whose clang and bounce takes the album up a notch.

Songs like “Dead End Friends” and “Bandoliers” seem to revel in 90s rock flavor while Cream-ish “Scumbag Blues,” (an observation made by my brother which was too good to even try and counter with another comparison), exemplifies the sort of generational hold the band tries to maintain. A song like “Elephants,” though, is made for fans of Homme’s love of experimental tempo and hip-like swagger, sort of like “Song For The Dead:” a blast of an intro followed by slow rock energy. It’s difficult to determine if decisions like these were made to appease the band’s three schools of thought, or if this amassing of musical styles was meant to distinguish Them Crooked Vultures from their respective OTHER bands. It’s like the White Album in reverse.

At times though, the combination of eras breed more hybridized variations of the music. “Interlude With Ludes” is like “I’m Designer” meets “Venus In Furs” and “Warsaw Or The First Breath You Take After You Give Up” could easily be a B-side from Lullabies To Paralyze, but even then shades of Cactus or Ten Years After pervade the mix leading into a Zeppelin sized interlude. Even the somewhat throwaway “Caligulove” seems to work as a comingling of styles, suggesting something a little more agreed upon with its Middle Eastern rumble and Nuggets rock rhythm.

Only compounding the album’s nonsensical indecision, “Gunman” takes a dance punk leap before “Spinning In Daffodils” takes a fairly machined approach, pummeling to an almost industrial finish and ensuring Them Crooked Vultures a marketing eureka in theory only.