Weedeater: Tour and Album on Hold Thanks to a Toe...

- January 13, 2010
After Southern Lord Records announced the upcoming album and tour of Weedeater, the tour's been put on hold for the following reason: 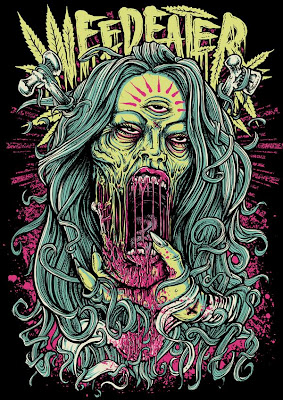 I pulled this from Weedeater's Myspace page
"As most of you know, here in the WEEDEATER camp we pride ourselves on a long tradition of shooting our band in the proverbial foot right before we're supposed to do something important. Whether it's a big tour, a recording session, or whatever else we're supposed to do, invariably we will find some way to try and thwart our grandiose plans. Well, it's no different for this recording session, except that this time we really did shoot ourselves in the foot. In fact we regret to inform all of you that this weekend, Dixie Dave shot his big toe off whilst cleaning his favorite shotgun. Yup, that's right. When reached for comment, Mr. Collins gave a quote that speaks for itself: 'It wasn't my intention to shoot off my big toe. This really fucking sucks and the pain is unbearable.' Mr. Collins' doctors have advised that he is to be bed-ridden for the next few weeks during his recovery. This will obviously affect the recording session (and the few surrounding shows in Jan/Feb), which will now have to be postponed until after the March/April "nine-toe" tour. Said tour is still 100% on, however, so check back soon for updates on venues and exact dates. It looks like the support bands will be awesome and the band is really stoked to play this new material after touring for so many years on the same basic set. Yeah...we knew that too, sorry but we're about to make good on it. And of course after all, we gotta keep workin', like workin' men do. Shooting your big toe off isn't free, for fuck's sake! So to re-cap...Keko sacrificed his pinkie for Down/Melvins, Shep broke his hand for Today is the Day, and now Dixie has generously offered up his big toe for Steve Albini to nibble on. Unless overtly fond of Limburger cheese and rotten flesh, Master Steve is advised to decline. Good day - WEEDEATER"

Sincerely,
Letters From A Tapehead
metal southern lord steve albini stoner to whom it may interest