What I Heard This Morning: ZU

- January 18, 2010
Public Guilt is re-releasing ZU’s out of print The Way of the Animal Powers. “Tom Araya Is Our Elvis” is a melting clash of guitar play, low bass rhythm and free form jazz brass that crawls and frightens. It’s like watching your imminent demise take its time getting to you.

”Tom Araya Is Our Elvis" 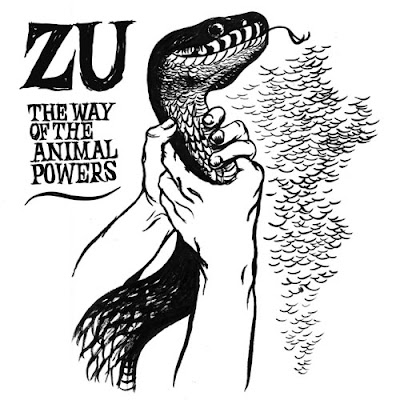 Over their 10+ year career, ZU's modus operandi of straddling and abusing musical genre's has lead them to release over 15 albums unique releases. Their improvisational/experimental blend of metal, math, no-wave, noise and punk caused John Zorn to describe their sound as "a powerful and expressive music that totally blows away what most bands do these days".

On The Way of the Animal Powers, the Rome-based sax/drums/bass trio is joined by Chicago-based avant cellist Fred Lomberg-Holm, to create a intricate and aggressive album, rich with improvisation. The interplay between the quartet and its' attention to tone and texture is exceptional. Originally released in 2005 on CD (now out of print) via the Xeng label, this incredible album finally gets a deluxe 180 gram, gatefold vinyl treatment, including a fresh remastering by James Plotkin (Khanate, Jodis, Lotus Eaters, etc.).

In the running for the world's hardest working band, ZU have played over 1000 shows throughout Europe, US, Canada, Asia, Russia, Mexico and even Africa, and have unleashed more than 15 releases on such labels as Ipecac, Atavistic, Frenetic, Red Note, Headz (Japan) and Wallace. The band has collaborated with a vast number of great musicians including Mike Patton, The Melvins, Dälek, The Ex, Peter Brötzmann, Nobukazu Takemura, Ken Vandermark, Eugene Robinson (Oxbow), Steve MacKay (The Stooges), Damo Suzuki, Mats Gustafsson, Paal Nilssen-Love, NoMeansNo, Joe Lally (Fugazi), Altered States and more. They've also shared the stage with Fantomas, The Melvins, Lightning Bolt, Ruins, Dälek, NoMeansNo and countless others.

Sincerely,
Letters From A Tapehead
00s experimental jazz metal mike patton no wave out of print progressive punk reissue upcoming releases what i heard this morning