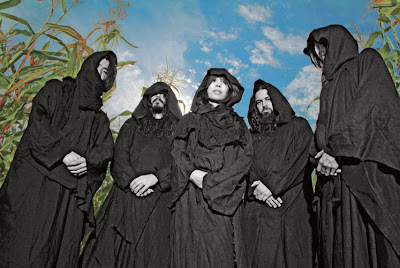 Southern Lord Recording Artists SUNN O))) and BORIS will unite to perform as ALTAR -- as heard on their 2006 Altar full-length -- at the third annual All Tomorrow's Parties Festival in Monticello, New York.

A varied barrage of of acts are confirmed to perform at this outdoor extravaganza in addition to ALTAR, including Iggy & The Stooges [performing Raw Power], Sleep [performing Holy Mountain], Sonic Youth, Mudhoney, Tortise, Brian Jonestown Massacre, Raekwon, Explosions In The Sky and more. ALTAR's performance shall take the headlining slot for Sunday, September 5th, the full day curated by legendary filmmaker Jim Jarmusch, who included selections from the Altar album and other Southern Lord artists in his 2009 film The Limits of Control.

Altar is, admittedly, the album that got me to appreciate SunnO))). Seeing this line-up and knowing that SunnO))) and Boris will be joining forces makes me wish I'd moved to New York. Maybe some live selections will surface via the Web at some point.

It was cool to hear Jim Jarmusch make use of Southern Lord's drone heroes for The Limits Of Control, but that was one movie of his that just didn't work. Not a good movie, unfortunately. A little too slow, pretentious and directionless... even for him.