Tahiti Boy & The Palmtree Family: Blood In Your Eyes & Brooklyn

- March 24, 2010
If pop music can attempt to maintain some semblance of artistic control or be accessible without giving up integrity, I can deal with it. Tall order, I'm aware, but pop music really has no credibility these days, and anything resembling "pop" in terms of structure or presentation typically gets lumped into some other categorical safe haven to prevent bands from being misunderstood. (I.E. If you're going to make pop music, it better be "indie pop.")

You can blame the state of things musically for the necessity of "subgenre reinforcement." Still, it hasn't prevented bands like Phoenix, jj or The xx from attempting to preserve pop sensibilities while shoving it in the faces of snobs like myself. Tahiti Boy & The Palmtree Family are another pop act that's either joyously upbeat or joyously expressive, but interesting. The word "gem" is applied to a lot of their songs, and appropriately so. 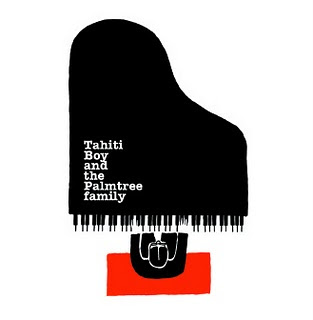 About a year ago, I posted a song they had done with TV On The Radio's Tunde Adebimpe. At the time, I was promoting an EP they were releasing. This time around, they've released an LP entitled Good Children Go To Heaven. It's available through Third Side Records.

"Blood In Your Eyes