An Evening with Mi Ami at the Danger Danger Gallery

As I’m no longer in my twenties, it takes a degree of introspection to realize what it is I notice most about the shows I attend. One thing is that I love loud music, but not when it’s played too loud. When I got to the Danger Danger Gallery in West Philadelphia, some of the first sounds I heard were the sizzle and sting of speaker feedback, grating enough to trigger involuntary facial scowls and squints. It’s a DIY venue and there will be technical drawbacks in such an environment. One needs to expect these things, but that doesn’t make it any easier to sit through.

Still, having recently interviewed singer/guitarist Daniel Martin-McCormick of San Francisco’s Mi Ami, I was happy to score an opportunity to meet the band, see them throw down to a live crowd and check out a couple Philadelphia acts in the process. 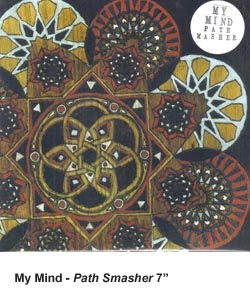 The Danger Danger Gallery is a makeshift living space turned venue. You enter through an unassuming door, marked only by a piece of paper that says “Danger Danger Gallery” on it with some scrawl underneath about where NOT to lock your bike if you’re of that persuasion, and you go up a flight of stairs. And, then you go DOWN a flight of stairs. And, then you pay money and get a nice indelible “V” tattooed to the back of your hand with a marker. And, that’s it: You’re in a room connected to some other rooms, one of which has a raised platform for bands to play. With no wandering to really be done, you either take a seat or find a corner and wait.

One poor soul was handling admittance and sound, running back and forth to either help out the bands with feedback issues or find out who needed to pay and be marked. It was pretty empty when I arrived at what I thought was a good thirty minutes before show time, so I sheepishly took baby steps around the joint and tried desperately to find something that could hold my attention: wall art, flyers, graffiti… whatever. It doesn’t pay to go to these intimate settings alone I’ve discovered. 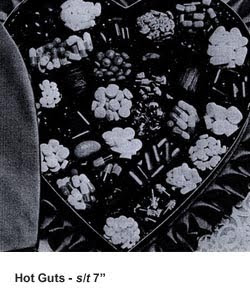 I did run into McCormick and Mi Ami drummer Damon Palermo. Being somewhat frazzled and constantly worried about how I come off, I’m not sure I made the best impression. My first mistake was asking Palermo if he was McCormick and then, upon finding out he wasn’t, automatically gravitating to the more familiar guy I talked to on the phone a couple weeks ago. And then, after being engaged in conversation, I sort of ran out of things to say despite being asked questions about me, what I’ve been listening to lately, stuff like that. Amazing I still have such issues with socializing.

Around 8:30, My Mind went on. Whoever was in attendance stood around band equipment, tall speaker stacks, cabinets and long guitar cases. The band does the lights, turning off the wall switch next to their audio to create proper concert ambience.

I was impressed with My Mind. They reminded me of Wire or Guided By Voices in that they took as little time as possible to get the point across, though there were progressive elements to their sound I could get into. I especially liked that they covered The Velvet Underground’s “I’ll Be Your Mirror.” I think it’s an underrated classic. They ended with an opus, relative to the length of the rest of their songs. 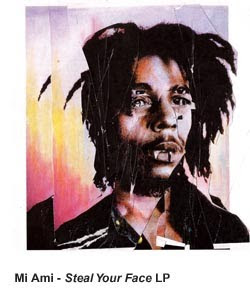 With Hot Guts, the singer/guitarist seemed forever locked into Johnny Marr’s “How Soon Is Now” riff, results of sound issues that seemed to persist throughout the duration of their set. It was so loud I held my ears and most likely heard what the music was supposed to sound like, sort of a bass thick Bauhaus/Suicide/Flipper hybrid that, at times, seemed the art rock psych equivalent of what The Horrors are attempting to cultivate. Though somewhat overwhelmed by the aural assault, Hot Guts was pretty cool: rhythmically strong, interesting.

The room was filled with obstructing backpacks, personal space invaders and sweaty bodies for Mi Ami whose set was alive, for lack of a better word. The equipment in the room was thankfully being removed, so space was becoming more and more available as bands went on, finished and packed their gear. This was a good thing, because the audience multiplied suddenly for Mi Ami’s performance and movement was necessary as the pulsations filling that space naturally demanded a physical response.

Mi Ami is a great live band. You can tell that they work well in a performance setting, their rhythmic coupling of Palermo and bassist Jacob Long a foundation for possible noise improv or jam possibilities. If I heard anything in this band that I hadn’t acknowledged before, other than their post-punk/dub sensibilities, it’s that they almost seem a fusion progression, sort of like Miles Davis’s On The Corner. Mi Ami holds true to that sort of experimental guitar phrasing, like a slurring trumpet, overtop what some may call simplistic and funky stride. In actuality, no one worked harder on that stage than Palermo, who was always moving, administering roll-beats to hi-hat, tom and snare like a machine gun. The venue was bouncing to this band, awash in their sectionals of dissonant rinse and groove, hooked like floundering hippies under chemical influence.

The room cleared soon after they finished, a line forming at the merch spot, comprised of either new fans or informed appreciators wanting after a vinyl copy of the band’s new album, Steal Your Face. 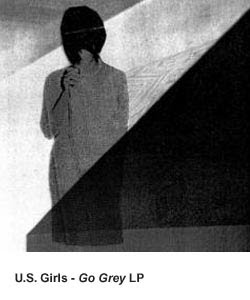 I got to sneak through the crowds and thank McCormick and Palermo for the great show, and I managed to get some posters cheap as appreciation for the interview, which was very generous.

With rolled up posters in my hands sort of propped up in front of me like a pregnant bulge, I shouldered my way to a decent spot on the floor so that I could check out U.S. Girls before heading home.

U.S. Girls is one girl, (as corrected by McCormick earlier during our first encounter), whose real name I don’t know and unfortunately couldn’t locate through research. Just know that she’s basically a sing-song cross between Nico and Julee Cruise, though into self-generated ambience and experimental noise. I liked what I heard, but unfortunately, couldn’t stick around for the entirety of her set. It was late and I had a drive ahead of me.