I guess grunge/alternative music was at its peek in ‘94, ready to dissipate in the second hand smoke of Kurt Cobain’s shotgun. As if to convey the significance of the chemical imbalances within the scene that were becoming media fodder thanks to Cobain’s drug habit, Mad Season, a supergroup of sorts comprised of Alice In Chains’s Lane Staley, Pearl Jam’s Mike McCready, Barrett Martin from Screaming Trees and bassist John Baker Saunders, was like an extracurricular activity designed to keep its members busy and off drugs. It’s just a shame it didn’t work: half its members are unfortunately deceased, Staley and Saunders having both overdosed on heroin. 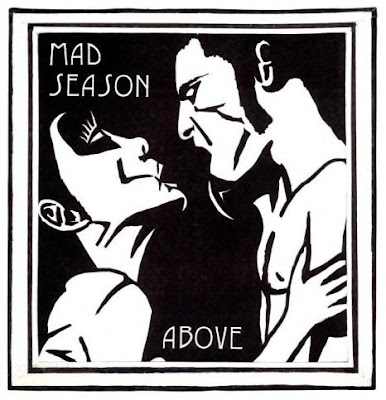 Above was the only album to come out of the group and I remember it being on rotation quite a bit when I was in high school. “Wake Up” was especially one of those songs worthy of meditation, the song’s thick bassline and somewhat minimalist rock approach crystalline and discernable next to the muddy and distorted output associated with its genre and the other respective acts that brought these four together. It will always give me chills, captivate me and put me in a certain headspace relevant to my uncertain youth.

Dan Goldin said…
awesome feature man. the crazy thing is i was just listening to this album yesterday! i love when mark lanegan and layne are harmonizing. so good.
5/18/2010 12:24 PM

Yeah, I was feeling a touch nostalgic and figured I'd wipe the dust off Above. Always seem to forget how much I like it.