Shopping For Records #28: R.E.M.’s Fables Of The Reconstruction

Hollywood, California – May 18, 2010 - R.E.M. has teamed with Capitol/I.R.S. for the July 13 release of an expanded 25th Anniversary 2CD and digital edition of the band’s 1985 album, Fables Of The Reconstruction. The new edition features the digitally remastered original album, plus 14 previously unreleased demo recordings, cut prior to the album’s studio sessions, including one long-sought track that has never been released. The commemorative release also adds insightful new liner notes by R.E.M. guitarist Peter Buck, with the 2CD package presented in a lift-top box with a poster and four postcards. On the same date, the remastered original album will be released on 180-gram vinyl. 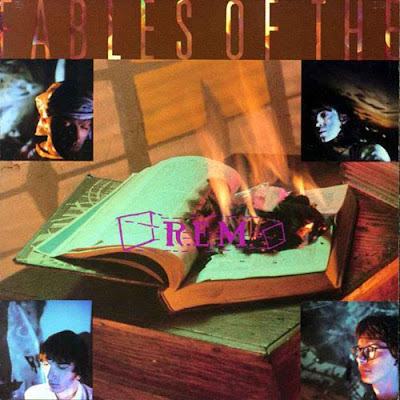 Fables Of The Reconstruction, recorded during the winter of 1985 in London, England, distant in geography, weather and culture from R.E.M.’s Athens, Georgia home, represented a musical step forward for the band and its members, vocalist Michael Stipe, guitarist Peter Buck, bassist Mike Mills, and drummer Bill Berry.

Produced by Joe Boyd (also known for his work with British folk and folk-rock musicians, including Nick Drake, Richard Thompson, and Fairport Convention), Fables marked the beginning of a more narrative, storytelling lyrical style in R.E.M.’s songwriting, with its songs spinning vivid tales of everyday life in the American South.

Before going to London to record, R.E.M. huddled in Jim Hawkins’ Athens, Georgia studio for a few weeks, woodshedding and building new songs from fragments, including many which had emerged during soundchecks along the band’s 1984 tour.

In his liner notes, Peter Buck recalls, “The last day of rehearsal, I think with Joe Boyd in attendance, Jim Hawkins recorded what we had come up with. We spent about four hours recording all the new songs live, with minimal overdubs. I hadn't listened to this stuff since we recorded it, and I'm kind of stunned at how good it is. My memory of the rehearsals is us scrambling to finish songs. The songs on both Murmur and Reckoning had been performed for months if not years by the time they were committed to tape. I remember feeling dangerously unprepared when we flew to London, but on the evidence of this recording we must have known what we were doing.”

“The Athens Demos,” as R.E.M. has dubbed them, comprise the new edition’s second disc of 14 previously unreleased recordings, including drafts of Fables’ 11 songs and three additional tracks that didn’t make the album. The three non-album demos include two early versions of songs that were later revisited by the band and recorded for other releases and one song, “Throw Those Trolls Away,” making its release debut on this new edition.

In the U.S., Fables Of The Reconstruction peaked at #28 on The Billboard 200, and its singles, “Can’t Get There From Here” and “Driver 8,” reached #14 and #22 on Billboard’s Mainstream Rock chart, respectively. In the U.K., Fables reached #35, the band’s highest U.K. chart position to that point in their career.

“It's a personal favorite,” writes Buck, “and I'm really proud of how strange it is. Nobody but R.E.M. could have made that record. It took our four twisted personalities and the legendary Joe Boyd to make an album that character-filled and vibey.”