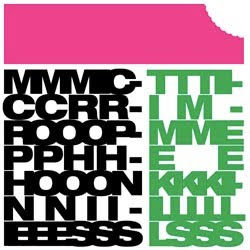 Were Microphonies a living character, he’d be the quintessential iNerd, overdosing on Butthole Surfers and Captain Beefheart albums with caffeinated exuberance, a network of plugs and snot coursing through his veins. The vision of musician Sam Farfsing, Microphonies is turbulent and often ridiculous, his ramblings about asymmetry, Los Angeles, Beatles loathing and copycats somewhat lost in the midst of his self-generated computerized bleeps, garage instruments and oddity.

His album, Tttiiimmmeeekkkiiilllsss, (or Time Kills as it will heretofore be referred), is a disjointed byproduct of Farsfing’s ambition, segment length songs seeming to cater to an American hardcore fan’s attention span. Having noted hardcore, the music does have attitude and snarl to it, ensuring that songs like “Vexxxed,” “Vatican City Pretties,” “Bowwowwow,” and “Flakey MC Flackerton” some level of resonance with the punk/alternative crowd. Songs like “In 3’s” seem more a New Wave or synth pop taste, a Devo flair on display, while “Everlasting Gob-Stopper” perfectly merges Farsfing’s electronic world with post-punk bass rhythm.

Other tracks like “Nnnmmm,” “Cut Your Fins And Learn To Swim,” and “Mr. and Mrs. Blank” seem more rooted in the Aphex Twin school of electronic experimentalism, playful with rhythms and sounds but resistant to any real rhythm or melody.

Though Time Kills feels rough and unedited, Farsfing’s Microphonies is an interesting peak into the artist’s head. Time Kills, at times, sounds like a thousand mid-eighties arcades being piped into one studio. At others, it sounds like potential.

"Cut Your Fins And Learn To Swim"