What I Heard This Morning: Carissa's Weird

- June 08, 2010
The Hardly Art label is releasing a retrospective compilation of the underappreciated Carissa's Weird entitled, They’ll Only Miss You When You Leave: Songs 1996-2003. The compilation will be out July 13th with reissues of their albums, Ugly But Honest, Your Should Be At Home Here, and Songs About Leaving, slated to release this Fall. 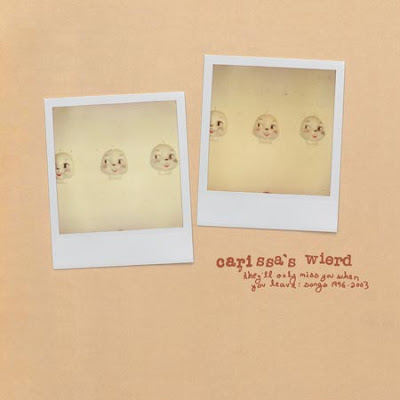 A run of 7” singles featuring the songs “Die” b/w “Sharing A Hole” are being made available through a preorder offer with Hardly Art. “Sharing A Hole” is apparently exclusive to this release, having only ever appeared on a tour EP that was self-released. First 50 orders gets the 7” and, for those who care, it’s pink.

“Die” does get a bit epic at points, but the melodies and vocals are sort of amazing in their own way, emotionally quilted together and impossible to ignore. Not being too familiar with Carissa’s Weird, I’d take “Die” as an indication of quality, convincing enough that the compilation would be worth a moment or two to absorb.