- July 14, 2010
You have to love concert events that make you question your residence. For this, it would be cool to live in New York City.

ALTAR is a collaboration between SUNN O))) and BORIS that is a result of both bands conceptualizing, writing and recording together as one entity. There are elements of each group's trademark sound but true to each group's progressive and experimental aspects, ALTAR moves into a completely new dimension. This is the first NYC performance of ALTAR. 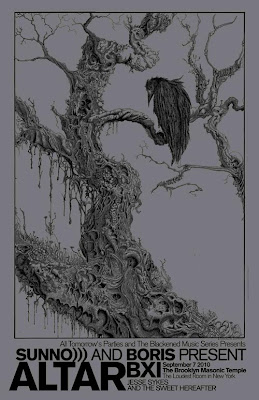 BXI is the collaboration between BORIS and Ian Astbury (The Cult). Southern Lord will release the debut recordings by this group in August 2010. This finely-crafted four-song release, simply entitled BXI, was tracked and mixed in Tokyo in late April. Astburys' iconic vocals are a perfect match for BORIS’s raw and emotive songwriting style. This is a very special and rare U.S. performance of BXI!

Listen closely to Jesse Sykes's stark descriptions of isolation, sometimes-swaggering toughness, fragile human emotion, and the possibilities of love, and you'll hear something that perfectly, tenderly, and surprisingly captures the feel of the 21st century so far.