Grab hold of your chakras we're heading into the spirit world. On October 16th, Northern California's Bird By Snow hiked three miles up to a secluded wooded grove in Big Sur, taking a few instruments and a toy Japanese camera with them into the fog. They came to a big oak tree and crafted a uniquely percussive sculpture from fallen branches (along with some twine, home-made ceramic chimes and a cymbal), and raised it in the boughs of the oak. This became the rhythmic centerpiece of a transcendent live performance series which we have here for your contemplation. 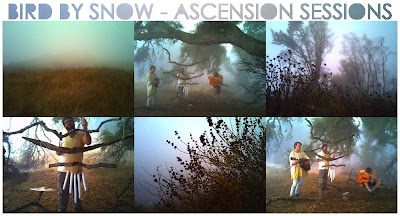 Friend of the band, Noël Vietor, documented this ascension with the toy camera, which adds a kind of mystical charm all it's own. Watch these Druids conjure music where there had been only whispers in the mist.

Bird By Snow are Fletcher Tucker, Spencer Owen, and Rob Little. They're wearing shirts which were dyed by Vietor using plants harvested from the Big Sur trail.

You can view the video here at IFC.com.

A review for Common Wealth can be found at No Ripcord.

Sincerely,
Letters From A Tapehead
Labels: documentary folk indie psychedelic to whom it may interest video