- November 24, 2010
Kicking Against The Pricks is experiencing some technical difficulties, so as I've posted links to the Marnie Stern, I've realized that none of them are working. So, in the interest of getting the review out, I've decided to publish it here and hopefully KATP will be operable soon.

Marnie Stern is as uplifting as she is complex, and has had two albums to push her sound and define her musical identity. 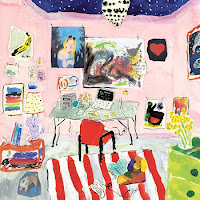 Remarkably, when most bands are as easy to trace as a set of footprints, Stern resides in her own genre, sharing her wild idiosyncratic finger-smithing and mathematical dialogue with percussive maestro, Zach Hill. His own elaborate skill set tends to Stern’s quirks with kindred understanding and finesse as he’s consistently in tune with whatever she’s doing. Cynics may dub her pretentious, but this music pours out of her so organically it’s too easy to chalk her up as just an ostentatious cult idol - especially with her new album, the highly personal ‘Marnie Stern’.


Up until this point, Stern has been a spastic rock pep rally wrapped up in innovation. ‘Marnie Stern’ is no less dazzling from a technical perspective, but she bares so much of her soul on this record that her reflection and woe outshine her musical abilities. She admits during Transparency is the New Mystery, “I’m not enough,” and it’s kind of a bummer.


For Ash was written for a deceased ex-boyfriend. Vocally, Stern’s upward register manages to sound heavenly, or joyful, even when unintentional. For Ash sets the album’s tone, but you feel as though the difficulties that influenced ‘Marnie Stern’ are something she is actually working through. Even ultimatums like “If you won’t let me in / I’ll have to give you up” (Risky Biz) stem from a dissatisfaction, but also determination to move on. So, the album is pensive but remains positive, and, although most of it is driven by catharsis, the punk/funk stride of Nothing Left or the moments of sonic haze in Her Confidence convey her enthusiasm to make complex and heavy rock music.


Female Guitar Players Are The New Black (love that title) is a discordant mix of time signature changes and wild fretwork, and Gimme’s springy chords transition into carpal speed soloing as Hill makes his sticks fly. Stern’s music is more cohesive than ‘In Advance of the Broken Arm’, but the alienating sections of guitar-fueled free-form rock remain her most prominent device; even if she does hold back somewhat on Cinco De Mayo - a close as she gets to a straightforward rock song. Hill’s percussion complicates the music, but the mechanized tone of Building A Body offers him an opportunity to minimize his approach.


‘Marnie Stern’ ends with The Things You Notice: sonic balladry finding lush melody somewhere in its echoing dissonance. Hosts of musicians actively seek out a sentimental cliché to pull some heartstrings, but Stern refuses to resort to a Hallmark methodology. The album wears her name; it wouldn’t pay for her to be false.