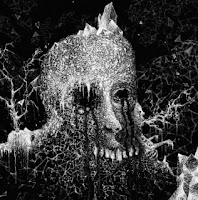 There is something dire about Locrian’s music, which is more than obvious both in terms of sound. As they’ve put out three albums in less than two years, (members Terence Hannum and André Foisy having brought on third member, Steven Hess), Locrian is continuously and persistently pushing themselves into sonic and swampy depths that seem both born out of B-movie bloodshed and the imaginings one conjures in a state of sensory depravation, or in their case, overload. Locrian is pure darkess: they hold high both the enveloping and expansive possibilities of “-scape,” which is something of a fixation they reveal through their album titles (Drenched Lands, Territories).

The Crystal World, though, is their most musical version of this journeyer’s nightmare, a soundtrack that’s both fearfully surrounded by invisible dread, but also animatedly scored with flickering science fiction (“The Crystal World”) and mesmerizingly long swells of buzzing tones (“Pathogens,” “Obsidian Facades”). Musically, they continue to draw from John Carpenter and Brian Eno, both of whom perfectly capture the sort of ambience and uncertainty Locrian manage to communicate, but they expand on these lessons and act as more than a loud rehash.

But, with the addition of Hess as a percussionist, Locrian’s mostly subdued violence catches stride, their build-ups delivering on any fearful intentions. “Pathogens” winds up caught in a torrent of rolled percussion that catapults the ambient noise into dueling howls of feedback. The sane reaction is to run away. It can argued that an undisclosed attack can at times be more frightening, but such an assault that surrounds you, hitting you with a loop of continual strike, walling you off from salvation, that seems frightening, too.

The album’s first track, “Triumph of Elimination,” is something you come to expect from Locrian, sort of a slow moving summary of where you are and what you’re in for. Track one transitions seamlessly into “At Night’s End,” retaining some of the environment’s embellishments until it explodes into calamitous clangor and guitars wring out walls of dissonance that fade into the ether, ghostly song layering the build.

“The Crystal World” and “Pathogens,” though also concerned with the soundscape, sort of showcase the band as a musical presence. Even “Obsidian Facades,” despite owning itself to noise over note, damn near comes close to shoegaze territory, the underlying feel and lonely tonal conveyance breaking through and revealing, for its final minute, an emotional passage.

“Elevators and Depths,” probably the most appropriate song title for a band of this ilk, takes an acoustic guitar phrase and twists it into doom metal. The song then transitions into beautifully rendered melodies, something of a violin section. The effect is more powerful than many of the album’s louder moments, concluding The Crystal World with lament as opposed to horror.

CD versions of The Crystal World come with fifty-three minutes and forty seconds called “Extinction.” It’s one of the most difficult pieces of unbridled sound I’ve had to sit through and it’s not because of the track’s length. Consider “Extinction” either an experiment in noise pollution or a dissertation on scare tactics as it’s both unsettling and mostly unlistenable. As a counterpart to The Crystal World, “Extinction” is a primitive and primal testament to Locrian’s quest for layered horror and, in some ways, a perfect culmination of their efforts. But, as The Crystal World succeeds at taking Locrian to a place where their ideas find the most resonance, “Extinction” is purely a point of interest.

P.S. — Reviews for the last two Locrian releases can be found below:

VBERKVLT said…
If you like the artwork from Locrian 's "Crystal World", you can now purchase a full color giclee print measuring 29 x 16 inches. http://shirtsanddestroy.com/justin_bartlett
12/05/2010 11:33 AM