Shopping For Records #34 (Revisited): Queens of the Stone Age self-titled reissue slated for 2011...

- November 03, 2010
I was excited to hear that once the deal between Josh Homme’s Rekords Rekords label and Ipecac Recordings was sealed, one of the albums to emerge from the partnership was the long out-of-print self-titled debut from Queens of the Stone Age. The release date, though, has been pushed off till early 2011. Doesn't matter: I'm still excited. Below are details. 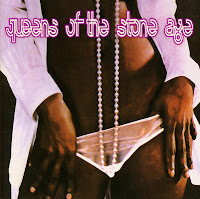 The reissue of Queens of the Stone Age's self-titled debut has moved to Jan. 11, 2011 (for both the CD and vinyl release).  None of the other details have changed, original press release with track listing and information about the reinstated songs is below with new release information.

The sought after and long out of print album arrives in-stores on Jan. 11 via Joshua Homme's own Rekords Rekords in two formats: a traditional CD release as well as a special bundled package featuring the album both as a 180 gram double-gatefold, double LP and a digital download card.

The three additional songs are "The Bronze," "These Aren't The Droids You're Looking For," and "Spiders and Vinegaroons."