Though not a huge enthusiast of the Tom Tom Club, I do get a kick out of Tina Weymouth kicking bass licks in pigtails. The funky bastid child of The Talking Heads’ Weymouth and Chris Frantz, Tom Tom Club is putting out a double LP, Genius Of Live.  The album will be comprised of live cuts from a post-9/11 performance in 2001 and “Genius Of Love” remixes.  Sounds like fun, nasty fun. 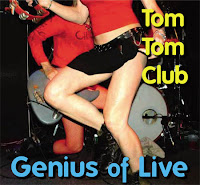 Tom Tom Club will release Genius Of Live through Because Music on 7th February. The two-disc package will feature select tracks from their Live at The Clubhouse album and new remixes of their timeless single, 'Genius Of Love'.

Live at The Clubhouse documented the iconic group performing in front of close friends at their home studio. The band can be heard playing their hit singles 'Genius Of Love' and 'Wordy Rappinghood' as well as signature covers of Al Green's 'Take Me To The River' And Hot Chocolate's 'You Sexy Thing'. The performance was recorded shortly after the September 11th tragedy, converting the stress and paranoia of the times into positive energy.


"We had a really exciting band and wanted to record the band for posterity while we were all together," band co-founder/drummer Chris Frantz says.


"Who knew if we would all still be together in the future? This was in October immediately following the harrowing events of September 11 and we wanted to do something positive and fun to counteract the sad and confused feeling people were experiencing at the time."


Tom Tom Club was formed by Chris Frantz and Tina Weymouth in 1981. Graduates from the Rhode Island School of Design, they moved to New York City where they founded the Talking Heads as a trio with David Byrne in 1975. In early 1981, the Talking Heads took a hiatus after five years of touring internationally and four studio albums. Chris and Tina began the Tom Tom Club and signed with Chris Blackwell and Island Records.


"Genius Of Love" has been sampled since the early days of Hip Hop by a wide variety of artists including, Grandmaster Flash, Mariah Carey, Tupac Shakur and T.I. The second disc on this release features prominent Latin alternative artists like Ozomatli, Money Mark, Senor Coconut and The Pinker Tones tackling the track.