- December 02, 2010
Ye disciples of Astbury! A press release via Cornerstone: 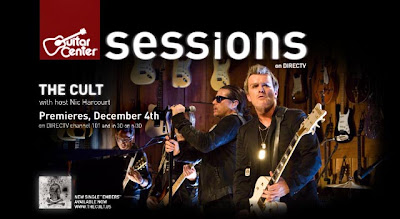 Super amazing British crew The Cult are the special guests on Saturday night's Guitar Center Sessions. Show airs at 9pm EST and it's going to be in 3D on Direct TV's n3D. It's also airing in 2D on Direct TV's 101 Channel.

They will be performing a rare and intimate set that includes not only stripped down songs performed by the band, but interviews throughout hosted by Nic Harcourt (of KCRW).

As an appetizer, here’s a video of The Cult performing “Embers” from their Guitar Center Session.