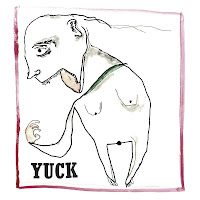 In early October, I mentioned that there were two 7” singles being released by a band named Yuck. “Rubber” was put out as a very strange, yet somehow beautiful, video, the song itself a hybridized byproduct of shoegaze, lo-fi and drone metal. Think Kevin Shields and Dylan Carlson: its rhythm a drone-worthy trudge, its distortion hypnotic and the underlying melodies sort of pretty.

For those of you in the 9-to-5, the video features graphic dog grooming (of the hershey squirt variety) and some nudity, so your bosses may not like you watching it on the company’s dime. To alleviate potential firings, I’ve also posted the single by itself along with a remix.

Yuck’s upcoming album, simply titled Yuck, will be out next February on Fat Possum Records.


Yuck - Rubber from Yuck on Vimeo. 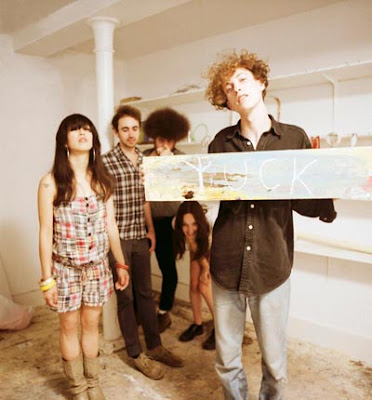 Over this past year, Yuck have emerged as one of the best and brightest new bands around, not to mention one of the most mercurial and unpredictable. Far from following any set patterns, they have instead forged their own path and cultivated a fervently devoted fanbase in the process, from their gorgeously winsome debut single "Georgia", released on Transparent (and recently on Fat Possum in the US), to the 4 track, piano-led Yu(c)k EP Weakend, on Mirror Universe Tapes, to finally signing with Fat Possum/ Pharmacy Recording Co and releasing their sprawling, epic single "Rubber" in November.

That deliciously maverick streak shows up once again on this, their hotly anticipated debut album. Self-produced, it finally unveils the full breadth and scope of Yuck, showcasing a band capable of sprinting off in pretty much any direction you can think of, so diverse and fully realised is its vision. It also shows that their previous releases were merely skimming the tip of the iceberg in terms of what the quartet of Daniel Blumberg, Max Bloom, Mariko Doi and Jonny Rogoff are capable of. This is a confident, wildly ambitious record, but also one which brims over with a ragged warmth and tenderness, tipping its hat at alt music heroes past such as East River Pipe, Dinosaur Jr and Sparklehorse while at the same time retaining a unique identity entirely its own. From the rousing call to arms of the opener "Get Away", to the hypnotic sturm und drang of "Rubber", and the grungy serotonin rush of "Operation", it is clear that this is a band in full control of their powers when it comes to anthemic and offbeat guitar rock. But they also reveal an achingly fragile side too, as with the gorgeous, heartsick croon on "Suck", or on "Sunday", where Blumberg asks, "Did you take the rhythm from me? Yesterday I had it all" over chiming, jangling guitars.

Additionally, after an autumn tour which took in raucously received performances at this year's In the City and a sold-out London show at the Lexington, Yuck will be taking to the road for another headline tour of the UK, before heading off to the US for a spate of live dates, not to mention their debut shows at SXSW in March.