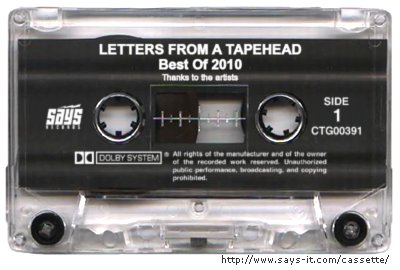 Times like these, I wish that I'd been able to attain the artists' collective permission so as to issue this compilation because I'm very happy with how it turned out.  Transitions were spot on for the most part, sequencing was decent, song selection was, I thought, varied enough to be unpredictable.

There were, though, a good amount of songs I couldn't include.  Below is the playlist and, after that, some credit to the intended inclusions.

As always, I'd really like to hear what you think, so... Hate mail? Comments?  Hit me up.

My wife had this to say about Mi Ami's "Harmonics (Genius Of Love):  "2010 was an angry year for you, huh? That first song was like ear rape."

Shipping News – "This Is Not An Exit (Live)" (One Less Heartless To Fear)
Snaky bass line, loud and somber riffs, "This Is Not An Exit" was a song that I went back to more than a few times even AFTER I'd finished my review of this album for Stereokiller.

Floored By Four – "Watt" (Floored By Four)
Just a fun little homage to Booker T & The MGs.  Also, the shortest song on the album.

Krieg – "Photographs From An Asylum" (The Isolationist)
This song induces vertigo and raises your skin into acute goose welts.

Myxer: Privacy Policy | Terms - More from Paul A. Rosales
Aluk Todolo – (Finsternis)
I'm non-descriptive on the track name because I don't know if ANY of them would've been forgiving enough lengthwise to appear on the compilation.  I've been meaning to properly acquire this album, and I still mean to, but in the meantime the promo I was given has two tracks, each one being the full length of either side of the actual LP.  So... not sure if 18 minutes of one drone track would've been worthy of selection, though Finsternis was a runner-up for my year end list.

Johnny Cash – "Redemption Day" (American VI: Ain't No Grave)
One of the best tunes of the final chapter in the American Series.  R.I.P., Johnny.

Untied States – "Wrestling With Entropy in the Rehabbed Factory" (Instant Everything, Constant Nothing)
Sort of a glass shatters oddity wrapped up in Sunny Day emulation.  Piano is eerie, percussion clatters.

Avi Buffalo – "Where's Your Dirty Mind?" (Avi Buffalo)
Avi Buffalo’s “Where’s Your Dirty Mind?” is like a teenage pep talk and, every time I hear it, I sort of revert back to those days of unease, want of acceptance and angst. Growing up, many of us heard our parents lie to us and call those developing years “good.” They weren’t good, but the visceral and emotional weight of “becoming” still holds some resonance. Human experiences tend to lose their varnish once those initial steps are made and this song points back and ably conveys a familiar, though thankfully lost, headspace.

Dum Dum Girls – "Bhang, Bhang I'm a Burnout" (I Will Be)
I sort of like the "nyah nyah" vibe of this song, singer Dee Dee prompting her loved ones to hold an intervention as she cheerily admits to smoking herb.

Dinowalrus – "BEAD" (%)
Though I wasn't completely sold on Dinowalrus' %, "BEAD" was one of the coolest songs I'd heard in those early months of 2010.  I like the post-punk, Public Image rhythm and the trippy drum loop.  Just a solid groove.

Shining – "The Madness and the Damage Done" or "Fisheye" (Blackjazz)
The mix could've used more insanity.  And, though, I tried to keep some room for either of these offerings off Shining's Blackjazz album, there was a flow developing that neither song could sustain.  I know that that's some nerdy shit right there, but I approach my comps like a producer: sound levels, sequencing, cuts and all.

Sincerely,
Letters From A Tapehead
best of buried in a good mix tape compilation