The Thermals: I Don't Believe You

The Thermals are releasing a new single in February and, for some reason, playing a live set on that show where George Lopez pretends to be A). a host B). funny C). a funny host.

Some info regarding the single has been provided by the ever-informative Terrorbird Media and check out their video for "I Don't Believe You," off their 2010 release, Personal Life.  Carrie Brownstein from Sleater Kinney interacts with an alarm clock.

Also, Pitchfork is hosting a video of another of their singles, "Never Listen To Me." 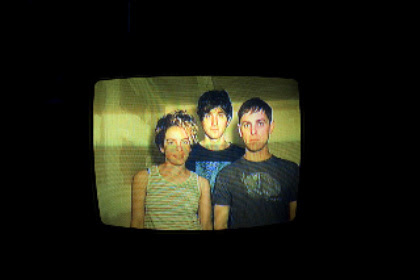 The Thermals are unstoppable! After an incredibly busy 2010 (6 tours, 4 singles and 1 LP), The Thermals are showing no signs of stopping or even slowing down! On February 1st, The Thermals will perform “I Don’t Believe You” from their awesome 5th LP Personal Life on Lopez Tonight!

Check out the video for “I Don’t Believe You” staring Carrie Brownstein here:

On February 15, The Thermals will release the third and final single from Personal Life , "Not Like Any Other Feeling,” on Kill Rock Stars. It's not like any other single The Thermals have ever released! Ok that's not entirely true. But this is marketing, people! Where the truth always takes a backseat to hyperbole. Kind of like a lot of relationships. The kind of relationships The Thermals explore in Personal Life, and especially "Not Like Any Other Feeling". Relationships in which (to quote the song), "You only exist to be replaced". "NLAOF" is filled with such  grand, bleak statements. But damn it if they don't ring true. There can be no overstatements when you're in love, or falling out of it.

"Not Like Any Other Feeling" is not unlike The Thermals' last amazing single, "Never Listen To Me" (in the musical sense.) The song is driven hard by the bass and drums, with the guitar taking a more melodic backseat. The vocals are loud and proud, intent on the listener understanding and absorbing every brilliant double negative. Pretty stoney mix, too! Thank you producer extraordinaire Chris Walla  (Death Cab For Cutie, Tegan and Sara.)

The Thermals just revealed the video for “Never Listen To Me” directed by Lance Bangs and Aubree Bernier-Clarke. The video was one of the last films shot on Kodak's Kodachrome film, which the company is no longer producing or developing. Check it out over at Pitchfork.tv: