- February 17, 2011
I'd not heard anything regarding rumors of a Black Sabbath reunion, but apparently speculation was thick enough to justify a response from Geezer Butler. 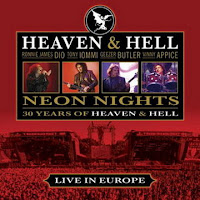 Feb. 17, LOS ANGELES -- Responding to ongoing rumors surrounding a possible Black Sabbath reunion, Geezer Butler has issued the following statement:
"I would like to make it clear, because of mounting speculation and rumours, that there will be definitely no reunion of all four original members of Black Sabbath, whether to record an album or to tour."

Sharon Osbourne has been more than happy to milk the senility-distressed rock n’ roller persona that Ozzy’s come to adopt since his stint on The Osbournes.  His integrity is featherweight at this point, so a Black Sabbath reunion would only work to destroy what credibility that band has managed to maintain.

Their legendary frontman just shilled for Best Buy with Justin Beiber for a Superbowl ad. In the aftermath of that, a resurgence of Black Sabbath would look like...

Fuck, I got nothing. Let’s just say that Anita Bryant, Jimmy Swaggart and Jerry Falwell (even dead) would probably be in attendance at every show, satisfied with the one-time terrifying and corrupting presence that their very "wholesome" and very corporate agenda helped sterilize.