Over The Hill (Halfway): Nirvana's Nevermind (Let The Initial Stages of My Impending Midlife Crisis Commence)

- February 24, 2011
A few days ago, Krist Novoselic tweeted to #happybirthdaykurtcobain.  It would've been Kurt Cobain's 44th birthday; long after teenage angst paid off well, long after he was bored and old.  His death seemed an easy write-off for a generation based in cynicism, (that's how I remember it, anyway, aside from a candlelight vigil, a couple subsequent suicides and a huge retrospective in Rolling Stone magazine), and for the generation's parents whose arrogance remained self-righteous, unjustifiable and typically out of touch. 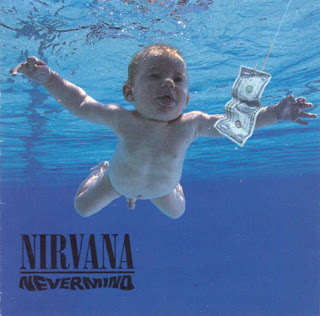 Peace and Love sold its soul for Expensive Drugs and Wall Street, naturally its progeny approached its own formative development with a keen sense of what it's like to be proud of obedience or proud of fraudulence.  If there's a legend to Cobain, it's now being upheld by digitized youth enamored with the romantic idea conjured by the notion of Teen Spirit, whatever that was, (deodorant, essentially).  The same could've been said about many 90s youth regarding Lizard Kings, (thank you, Oliver Stone), but Jim Morrison at least had the good sense to off himself after his relevance had expired.  For those of us whose minds were irrevocably altered by Nevermind twenty years ago, Cobain's suicide felt like betrayal, and whatever fire he'd ignited in all of us he'd selfishly cut the wick and left the light burning long enough to leave ash, and pain, in its wake.  Whatever satisfaction was gained from Alternative music's intrusion into the mainstream's contentment to suck, all of it had become as pointless and meaningless as Woodstock, especially once Pepsi bought up that cultural milestone.
With a spearhead like Cobain leading the charge for many fucked and disenfranchised youth, though, you almost can't blame the old heads for gloating.  Inasmuch as the Baby Boomers folded in the face of capitalism, no one sells out like a junkie.  Besides, Nirvana's contribution to popular music was met with the same "smelling shit" grimace The Beatles had left on their parents' faces almost thirty years prior.  Nirvana's first appearance on Saturday Night Live was something I recall anticipating for the length of an entire Saturday up until 11:30PM.  My Dad's attitude toward what he'd witnessed, especially when I'd made the Ed Sullivan comparison, bore a level of misunderstanding and superiority I hoped I'd never hold over my own children.

Understanding, though, now as a 34 year-old parent, remaining in touch and respectful isn't the easiest thing to achieve, especially when the generations' popular music continues to devolve.  As the years tick by and hard work and creativity continue to take a backseat to shortcuts and complacency, albums matter less and less on a grand scale, and I feel fortunate to have experienced an album so potent.  I don't know if any album has had the impact of Nevermind since its release.  Well, maybe Eminem's Marshall Mathers LP, but tipping the scales on hate speech and first amendment debates isn't something one would consider inspirational.  Controversial?  Sure.

A couple days after I'd turned 15, my Christmas gift from at least three people was Nevermind on cassette.  I remember giving one to my brother; not sure where the other wound up.  I was very eager to give it a listen so, as not to offend the adults around me, I found a Walkman and pretty much kept myself plugged into it for the length of the day.  As far as the visceral experiences one has as a teenager, I felt like I was being introduced to something important and exciting.  What I didn't know at the time was that Nirvana's output was an appropriation of Pixies' constructs and Beatles' melodies.  What I also didn't understand was that there were a lot of bands, from Seattle and other parts of the U.S., that were working toward exposing the independent underground.  Nevermind just happened to be the first.

Stock may have diminished to some extent on this album.  The unfortunate aspect of being essential is that rock radio does all it can to wring singles out like wet towels and sort of leave them worn and wrinkled; used.  Sooner or later, you can't stand them anymore.  "Smells Like Teen Spirit" has definitely found itself alongside "Stairway To Heaven" or "You Shook Me All Night Long," veritable rock monuments drained of any and all purpose or meaning thanks to continual, pointless air play.  Because of this, what you find listening to Nevermind twenty years later is that it's not a good album because of "Smells Like Teen Spirit" or "In Bloom."  Sure the A-Side still contains some great tracks that haven't yet lost their appeal, songs like "Come As You Are" and "Lithium" remain some of the album's best moments.  "Breed?"  Infectious.  (I remember thinking there was some real poetic genius behind the "We can plant a house/We can build a tree" lyric.  Now I hear the line and think, "Oh.  Heroin.")  Granted, Nevermind's entire first side bred an entire youth culture and hijacked about ten dollars from every wallet, but the B-Side...

If Nevermind can still be called one of the greatest rock albums of all time, it's because of the B-Side.  Aside from "Territorial Pissings'" mock n' roll appropriation of The Youngbloods, "Drain You" is probably one of the best songs Cobain ever wrote, a minimally accessible, though hook savvy, pop abstraction.  "Lounge Act" resonated more with me than any other song on the album, enamored with Cobain's guitar phrasing and Novoselic's low end.  And, I really dug the chorus.  (Dork moment:  I used to take pencil sticks, play this song, and pretend I was drumming along.)  Honestly, what made Nirvana the ultimate anti-Pop group, were their B-sides and rarities.  They knew how to dress up a song for mass consumption, but also how to properly convey where they were from musically.  Whatever luster's faded from the "Teen Spirit" that brought Nirvana their success, Nevermind's still credible.  It's good when you realize at least SOME of your teenage epiphanies continue to hold true.

Cliches being cliches, there were doors opened for me that I've been navigating ever since my three copies of Nevermind found permanence in my life, a relic of the utmost value in terms of what it's offered me.  I can say with all certainty that this band and this album changed my perspective and exposed me to albums, songs and bands that I may have never discovered otherwise.  I'm grateful, but I'm also pissed off that I'm emotionally caught up in a nostalgic "remember when."

P.S. — If interested, I reviewed the Bleach Deluxe Edition for No Ripcord for its twentieth anniversary release in 2009.
90s alternative legends over the hill perfect records sub pop