What I Heard This Morning: Dumbo Gets Mad

- February 26, 2011
If you’re reading this, might I make a suggestion? An Italian psych/pop band Dumbo Gets Mad has an album out dubbed, Elephants At The Door. The band’s label, Bad Panda Records, is offering a free download of the album so long as you promote it via Facebook or Twitter. This is the label’s maiden release. 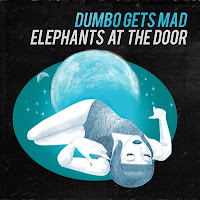 As far as free albums go, you could do a lot worse. Elephants At The Door is aurally bubblicious and dressed to some extent like a blotter acid Fruit Roll-Up. There are samples/beat machines and occasional lapses into minimalism reminding one of The xx and chillwave-ready lo-fi attached, though not burdened by. The introductory “Limbo’s Village” is like enlightened muzak, department store moog and jazz-syncopated percussion. “Marmalade Kids” sounds like it might have been inspired by countless spins of Steely Dan and The Sugarcubes. “Sleeping Over” crosses interacting keyboards with helium-addled vocalization.

Vinyl copies of Elephants At The Door from Big Cartel were released February 22nd. To order, click here.

Hit up your favorite Internet networking hotspot, (one of the two), and download an entertaining new album.

You can also stream it at Soundcloud.