What I Heard This Morning: Joan Of Arc...

Jam out on this sample of Joan Of Arc's "Brother #2" for the 9 minutes worth that's available.  Consider.  Read up. 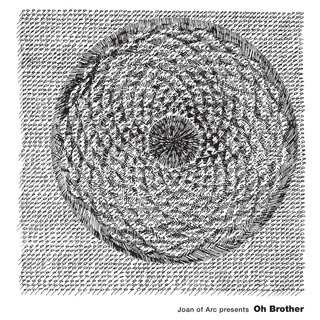 After more than a decade of existence, 10 proper full-length albums, and on the heels of their instantly sold-out Cassette Box Set, Chicago's Joan Of Arc has compiled their latest opus: Oh Brother. Out now, the LP see the release of this hand-numbered double LP, limited to just 500 copies.

Featuring collaborations with 14 musicians, including Zach Hill of Hella & Rob Lowe of Lichens, this is indie-rock for the initiated. Oh Brother is the combination of four distinct albums embarked upon but never completed by Joan of Arc curator Tim Kinsella. Each album is broken up and spliced together into a tessellating unity of long, noisy, meditative, instrumental movements which fill the totality of each side of this double LP. Each side --A, B, C, and D-- contains just one track, with song lengths varying from 20 minutes to 20 minutes and 36 seconds.

Kinsella, known for the elegiac density and free-associative quality of his lyrics, has dispensed with words altogether on this album - choosing rather to break up and splice together these instrumental studio sessions into a tessellating unity. This is Joan Of Arc at their most esoteric and expansive.

The four distinct ensembles woven into Oh Brother are:


Download a 9 minute sample of the song "Oh Brother #2":
http://www.joyfulnoiserecordings.com/mp3/jnr66.mp3

Sincerely,
Letters From A Tapehead
Labels: experimental indie what i heard this morning