What I Heard This Morning: Adebisi Shank

I'm sold. First of all, Irish maniacal math trio, Adebisi Shank, have a great album title, This Is The Second Album of a Band Called Adebisi Shank.  Menomena did something similar with I Am The Fun Blame Monster!, which unscrambled read, "The First Menomena Album."

Second of all, Adebisi Shank is indeed comparable to a technologically aided progressive act like Battles, but there's also a very raw and reckless edge to them that reminds me of Shining's Grindstone album.  They utilize overt metallic riffs, almost Yes-tinged ivory theatrics and vocoder-enhanced vocals, suggesting archaic notions of science fiction's future world.  I've posted two singles, "International Dreamboat" and "Genki Shank," but there is an option to stream the entire album through one of the links I'm posting below.

All information is courtesy of Us/Them Group. 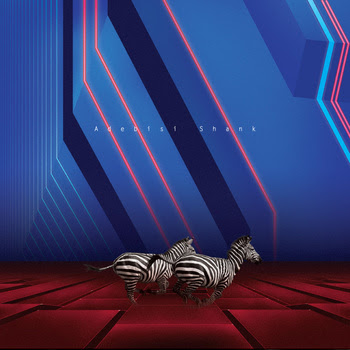 This week, Ireland's multiple award-nominated breakout trio Adebisi Shank sees the worldwide release of its critically-acclaimed recent album, This Is The Second Album of a Band Called Adebisi Shank via Sargent House. The band also makes its U.S. live debut this week during the South By Southwest music festival in Austin, TX. See below for details on all of their U.S. shows.  RCRD LBL launches a free MP3 download/stream for the song "Genki Shank" today (get it HERE). AOL Spinner will also offer a full album stream all week long, listen to full album HERE.

Adebisi Shank has signed to Sargent House for worldwide management and release of its sophomore album, to be released on March 15th, 2011. The Wexford, Ireland trio deftly merges the triumphant guitar harmonies of Fang Island with the mathematic precision of Battles, the genre-surfing playfulness of Daft Punk and churning intensity of HEALTH. But it's much more than the sum of those parts, it's a sound befitting of the retrofuturism we've come to love about old films where archaic technology collide with far more further-reaching ideas. To wit, the album cover depicting two zebras galloping across a Tron-style neon landscape perfectly embodies the transcendent intersection of triumphant guitars and rollicking drums with vintage synthesizers, marimbas, horns, vocoder, synthesizers, ensemble percussion and musical instruments we're not sure have even been invented yet.

Adebisi Shank has been doted on by Irish, European and UK press since its 2007 debut EP, 2008 full length and the 2010 Irish release of This Is the Second Album of a Band Called Adebisi Shank -- which topped countless Year-End Best of 2010 lists, was nominated for the coveted Choice Music Prize (Ireland's equivalent of the Mercury Prize) and named by Britain's Daily Telegraph newspaper one of the Top Five Best New Irish Bands. The album was previously issued in Ireland/UK by equally likeminded and groundbreaking DIY Irish label Richter Collective (co-founded and co-operated by Adebisi Shank drummer, Mick Roe) in 2010.

This is the Second Album of a Band Called Adebisi Shank features contributions from Mercury Prize nominated Villagers frontman Conor J O'Brien and Ireland's Choice Prize winner Richie "Jape" Egan among others. The album was recorded and produced by the band and Stephen J. Caffrey in various locations around Ireland and mixed and mastered by TJ Lipple at his home in Washington DC. The trio's debut full length, This is the Album of a Band Called Adebisi Shank was produced by legendary musician (Jawbox, Government Issue) and producer (Jawbreaker, Dismemberment Plan) J. Robbins.

"On the first album, our mission was get in, tear it up, get out," explains bassist Vin. "The whole thing is over in about 24 minutes, which is really cool, but this time we wanted to make something that you could really spend a bit of time with, get a bit lost in. This one's 40 minutes, which might not sound a lot, but to us that is almost like a double album. There's a real sense of geography to the songs, you can really feel the places we've been and to an extent, the people we've met as we've travelled around. It seemed to make sense to bring in as many of our friends as we could to give the album the party vibe we felt it deserved." He continues, "It's a big glorious mess."