- April 04, 2011
My daytime is spent as a 9-to-5 cog. Gainfully employed, I sit in a cubicle with headphones fastened to my head, listening mostly to the new music I’ve either received or singles directed my way via press release. I have an almost 90 GBs iTunes collection amassed in my employer-issued laptop, so much of which I don’t get to really listen to. 54.9 days worth of music listening. So, I decided today that I’m going to listen to my collection alphabetically until I run out of music, revisiting old favorites and reconsidering albums I haven’t listened to since reviewing or discussing. 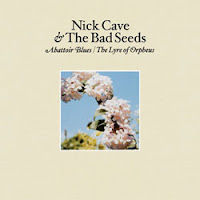 Nick Cave with a soul choir. Abattoir Blues, (Disc 1 of the 2 CD set that also contains The Lyre Of Orpheus), is an entertaining Bad Seeds album that demonstrates where the band was going to go for their 2008 bit of awesome, Dig!!! Lazarus, Dig!!!. “Cannibal’s Hymn” is an excellently sly listen, sleek and noir-ish. The title track strangely comes off like a very serious take on The Beatles’ “You Know My Name (Look Up The Number),” that same pressing of a single piano key and an overly present kick drum and snare. “Get Ready For Love” is a good rock intro and “Hiding All Away” almost makes Grinderman strides toward psych-addled punch and heightened garage-slop amplification. Not the most seminal addition to the canon, but it’s Nick Cave: There really is no wrongdoing to speak of when it comes to him.