“What could be romantic to Mike Watt?” — Minutemen, “One Reporter’s Opinion”

The declaration “we jam econo” left Mike Watt’s mouth in some old archival footage of a Minutemen interview, the sign off when the interviewer prompted the band for last words. His statement became the basis for the title of the 2005 documentary, We Jam Econo: The Story of the Minutemen, a tell-all account of the band’s influence, philosophy and impact. The idea of economy was essential to the band’s make-up and to their very survival because, after all, when you’re making your own rules with no big label backing to fund your activities, recording or touring, you make the most out of very little. “Jamming Econo” was not only a lifestyle, but the impetus behind the band’s music as well. D. Boon’s abstract vocal haikus and high treble guitar playing were the abrasive, punk rock compliment to Watt’s solid, funk-driven groove and George Hurley’s self-taught jazz syncopation. Clarity of tone, song brevity, trimmed fat, no rock star posturing — How else do you fit 7 songs on a 7” single? How do you say all you need to in the space of 60 seconds? Just check out their first EP, Paranoid Time, and listen to how they pulled it off. (The album is under 7 minutes long, but was strong enough to introduce a new and influential voice to a germinating post-hardcore scene. However you feel about the band, that’s pretty remarkable.) 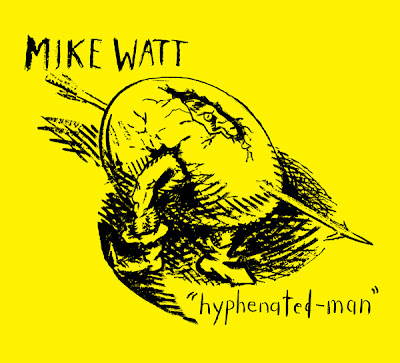 After D. Boon’s death in 1985, Watt disconnected himself from all things Minutemen for about twenty years before being asked to participate in the documentary. Watching him talk about the music in the film, you can tell it’d been a while since he’d looked at any Minutemen release or talked about any of the songs. Discussing the albums, he came off like he was visiting with an old friend after decades of little or not contact, genuinely engaged in the conversation but nervous about reviving an old and potentially painful relationship. The weight of D. Boon’s loss has loomed over Watt for many years and with Hyphenated-Man, Watt’s third release in his series of personalized concept albums, (or “operas” as he so refers), he returns to “jamming econo,” the album a thirty-song treatise on minimalist songwriting, Hieronymous Bosch and, as Watt puts it in his description of the album, “kind of tripping on what men to do to ‘be’ men.”

Actually thirty parts of one big idea, Hyphenated-Man finds Watt as part of a trio, (The Missingmen: Tom Watson — Guitar, Raul Morales — Drums), his ideas expanding on those old and eccentrically conceived Minutemen tunes that accomplished a great deal without embellishments, solos or time signatures. With this in mind, and considering the distance he kept from his past, (Watt’s subsequent role in fIREHOSE and his now longstanding membership with The Stooges notwithstanding), his other projects have been jazz oriented or musically progressive to some degree. His Floored By Four project, for example, is a reconsideration of jazz-fusion, sort of in the vein of Miles Davis and Sun Ra. The last of his operas, 2004’s The Secondman’s Middle Stand, was a Danté inspired narrative full of odd rhythm patterns, time changes and epic-centric grandstanding. Economy hasn’t seemed something he’d considered in quite some time, especially with the roster he shared for 1995’s Ball-Hog Or Tugboat?, a collaborative effort featuring a slew of peers and then-relevant fixtures in the alternative scene.

This isn’t to say that Hyphenated-Man lacks vision: Watt’s eccentricities unfailingly fuel his songwriting. But, the familiar stripped down sound catches your attention within seconds of the first song, “Arrow-Pierced-Egg-Man.” There’s a seasick level lack of balance to the song and an overt minimalism that evokes the inventive spirit he shared with D. Boon. “Belly-Stabbed Man” and “Finger-Pointing Man” are especially vintage Minutemen, Watson’s guitar almost tuned up to the scraping guitar sound Boon achieved. “Fryingpan-Man” almost seems like an attempt at rewriting “This Ain’t No Picnic.”

Aside from the reconnection Watt conveys, though, there’s a vitality and comfort to his performance. The grandness that might otherwise be associated with any piece of music dubbed “operatic,” especially at the hands of an iconic hardcore bass player, would be a tough sell without dipping a toe or five into the pretension pool. So in his element, though, and so naturally adept at this sort of playing, every move he makes feels genuine. If these songs had a touch of calculation or premeditation to them, the whole album would feel false, or simply like the recycling of a sound well associated with the music’s performer.

“Hamming-Castle-Bird-Man” is a confident and powerful tune followed by dirty riffing in “Bird-In-The-Helmet Man.” Other songs like “Hollowed-Out-Man” and “Hill-Man” come off like mid-eighties art rock, pleasant and tight with an innovative quality. The album’s closing track, “Wheel-Bound-Man,” seems to take cues from Talking Heads’ “And She Was.”

Even with a minimalist approach, though, Watt finds a way to experiment with the disjointed “Head-And-Feet-Only-Man” and the surrealist “Bell-Rung-Man.” Certainly Watt’s capacity for oddity wouldn’t suffer at the hands of reduction, which benefits the album greatly. Hyphenated-Man is eclectic enough that it never grows dull, and Watt does a great job sequencing his more straightforward songs with the less accessible ones. His last very loud moment before the album ends is the peculiarly titled, “Man-Shitting-Man,” which boosts the amplifiers a notch.

I’ve been listening to Hyphenated-Man on and off for a little over a month. I wouldn’t be lying if I said that I wasn’t constantly finding new reasons to enjoy and appreciate what Mike Watt has created. Obviously, he benefits from the nostalgia associated with this sound and from what might be seen as a return to his roots as a D.I.Y. musician, but his age and wisdom are very apparent on this album. Neither slow him down. Instead, they offer him an opportunity to examine his artistic development cathartically. Think of Hyphenated-Man as an incorporation of Watt’s current self with the former self he’d avoided for so long, his salvation summed up thirty times in the space of 47 minutes, which is also pretty remarkable.

Michael said…
I refused to listen to this album until I saw it performed live. I really can't say why, other than that I wanted the immediacy of a live performance to add to my first impression. I wasn't at all disappointed by doing so. I'd have to regard this as a masterpiece easily the equal of Double Nickles on the Dime. And the lyrics were especially helpful to me in understanding Watt's approach to language. As an Art History major, I was quite familiar already with the Bosch altarpiece, and found Watt's refusal to resort to any other than direct,honest expression unfiltered by the volumes of speech and writing about the painting to convey a more honest, direct expression of the painting than said "scholarly" verbage.
7/27/2011 10:49 AM