What I Heard This Morning/Week: Gypsyblood, Making Friendz, Coca-Cola 3

- April 13, 2011
I blame life, because I always do when I fall so far behind. In fact, I’ll just apologize now for the future of Letters From A Tapehead, as work, family and overall exhaustion will always factor considerably with the frequency of updates and reviews. Just know that I have a lot to get through and that I’m working on it—slowly, but surely.

In the meantime, this is the good/interesting shit I caught onto this week:

There is a very distinct Jesus And Mary Chain/Magnetic Fields haze that drapes the otherwise pop-driven output of Gypsyblood, their new album Cold in the Guestway having just released today (4.12). Some might say that Yuck is also capitalizing on 90s revivalism and attempting to evolve lo-fi, (sort of retrofitted Guided By Voices and Dinosaur Jr., with maybe even some Sonic Youth for dissonance sake), but I would focus on “progression.” If indie rock and the less accessible side of pop music is going to cling to melodic distortion, it’s good that songs like this are coming about.

All information on Cold In The Guestway is courtesy of the ever-awesome and accommodating Terrorbird Media:

Stream: Cold In The Guestway via AOL Spinner & Absolute Punk

Download “My R.K.O. Is M.I.A.” via Consequence Of Sound

The Chicago Reader recently sat down with Adam and Kyle from Gypsyblood to discuss their “accidental retro” sound. Read the fantastic interview here.

In the end the pair recorded around 30 tracks working on their own in the dead of Chicago winter in an old building designed by Frank Lloyd Wright. The songs were captured on equipment normally used for film audio recording. Faint sounds of the band's bustling neighborhood outside can be heard at times throughout. There's a distinctly haunted, living presence to both the recording and the songwriting of Cold In the Guestway that cannot be replicated in a sterile studio environment.

Many musicians and other lucky few who have heard Gypsyblood have succinctly remarked, "my new favorite band."  Dave Davison of Maps & Atlases and the solo project Cast Spells, who brought the band to the attention of Sargent House, remembers the first time he heard Gypsyblood. “One evening I was walking to get dinner when I was called into a parked car containing Chris Alvarez, Kyle Victor and Adam James. They were listening to the first mixes of the Gypsyblood album Cold In The Guestway and upon hearing the songs, I immediately wanted a copy for myself. When I finally got sent a copy a week later I was hooked! I first met Kyle and Adam while they were playing in the band Karma With a K. Gypsyblood offers a more refined, but equally raw version of the music that I've come to enjoy from Adam and Kyle and their live performance is every bit as entertaining and even sometimes scary as it ever was. Whether in a small gallery or outdoor festival stage, the way that Adam is able to utilize and incorporate space into his performance is part of what makes him truly fantastic frontman.”

"Everything revolves around that feeling of restless old souls, a timeless aspect to the music," explains vocalist/guitarist Adam James. "We've all been on this planet -- whether we were in a past life, or whatever. We've all been singing these same notes for decades and now it's finally getting out to people's ears. It's something that comes from deep down within. It's unique to anyone who understands it."

Making Friendz is bratty as fuck.  Some may not be so readily accepting of the bouncy, pep rally snot delivered by singer Tami Hart like she's the unwanted teenage lovechild of Leather Tuscadero and Toni Basil, but it's tough not to appreciate.  At least, it's fun.

All information below is also courtesy of Terrorbird Media, and there's a lot of it.

Nearly ten years after her two solo records, New York Times “Artist to Watch” Tami Hart is back with the debut album from the latest of her many projects, Making Friendz. Social Life, her much anticipated return, is a sweet, sweaty mixture of lo-fi punk and glossy pop, R&B and disco, rooted in a spirit of collaboration with fellow artists and friends. But make no mistake, Making Friendz is Tami Hart. Brooklyn Vegan premiered the lead single, the dirty yet dancy and super upbeat jam "Situation."

Hart, formerly signed to Mr. Lady Records, recorded two full-length albums by the time she was 21. By 22, Hart consciously moved away from the “folkie” image her critics had constructed and began her foray into noisepunk. She played guitar and sang in Gangway (bandmates included members who would ultimately become No Age) and played with Coachwhips, Abe Vigoda, K.I.T., eventually touring with Mika Miko. In 2005, Hart moved to New York City and started a two-piece garage band, Winning Looks, for which Kathleen Hanna (Bikini Kill) recorded and pressed a limited 7”. Most recently, Hart has been playing bass for JD Samson’s latest band, MEN.

But by the time the Winning Looks 7” was released, Hart had already begun writing songs and finding collaborators to work with on Making Friendz. Inspired by listening to tracks by the likes of Timbaland, Justin Timberlake, and Missy Elliott, Hart began experimenting with dance music, while still keeping her innate punk point of view. After recording demos of what would eventually become Social Life, Making Friendz signed with Brooklyn record label Last Bummer Records, and will be releasing the album June 21st, 2011.
----
JD SAMSON & SIA LOVE MAKING FRIENDZ! 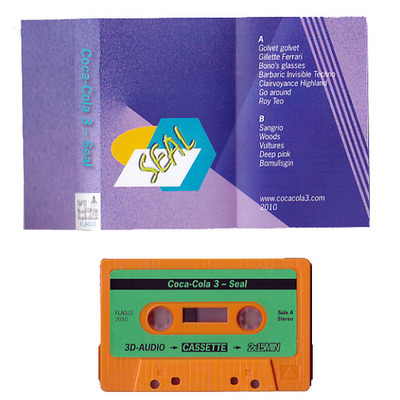 I received an email a couple days ago from Tobias Lund of Flacon Recordings which, as best as I can tell, is a cassette devoted label.  Lund directed me to Coca-Cola 3, who have two cassette releases out on the Flacon label called Seal and Moby, (which is pretty fucking cool).  The music?  Not sure this would qualify as "music." Experimental?  Absolutely.  Noise?  Even better.  The band's opposition to melody borders on fascinating and CC3's lack of accessibility is only enhanced by their album art, which seems influenced by Nagel, Swatch Watch patterns and 80s florescent cheese.

They have a song called "Go Around" that might suffice in conveying what this group, (if it's even a group), is all about.

You can download the full Seal and Moby records at the label along with other release.