I know I'm spotlighting Gypsyblood's video for "2-4-6 In The Dark," but the band made an appearance recently on BreakThru Radio and it's worth checking out.  There's Q & A and some live performances of songs from their new album, Cold In The Guestway, which was just reviewed for No Ripcord.

All links, images and info come courtesy of Terrorbird Media.

New Record Cold In The Guestway Out Now On Sargent House 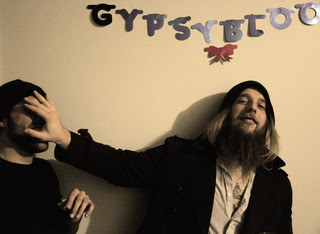 Chicago-based band Gypsyblood stopped by BreakThru Radio for an in-studio performance before playing at Bowery Ballroom with their good friends Maps & Atlases. The band performed tracks from their debut album Cold In The Guestway out now on Sargent House

The name Gypsyblood itself fits nicely with the group's aesthetic: the eternally restless gypsy spirit and the visceral music running through the veins of successive generations."It's post-consumerist pop music," James suggests. It's timeless and undeniably powerful.
“…packed with what seem like nods to the fuzz-addicted indie rockers of a generation ago—Dinosaur, Archers of Loaf…” – Chicago Reader

“Gypsyblood pushes out some damn fine dance tunes and melodies from the fuzz. Their debut album, Cold in the Guestway, is a tight amalgamation of influences with a sprinkle of Chicago punk grime.” – Consequence Of Sound

“Single My RKO Is MIA represents a pretty nice slice of the band’s arc-wire mojo. Warmer than Bauhaus, more gelid than JAMC, and on the same street as Factory. Dig the energy, the song’s very existence seems threatened by it own maniacal rambunctiousness, yet it manages to maintain a playfulness that encourages touching. I absolutely love this tune.” –My Old Kentucky Blog