What I Heard This Morning: Ides Of Gemini 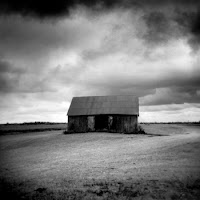 Amid news of the band’s signing with Neurosis label, Neurot Recordings, myself being somewhat of a label loyalist I went over to Ides Of Gemini’s Bandcamp page so as to sample the mayhem of their EP, The Disruption Writ. Very minimal and ghostly, but absolutely entrancing. Singer Sera Timms (also of Black Math Horseman) carries a perfect mixture of drone and melody to enhance the brooding sounds behind her, which consist mostly of rapid and repetitive chord play via film/music journalist J. Bennett and Kelly Johnston's very spare percussion.

IDES OF GEMINI is a collusion of musical forces precipitated by the haunting and inimitable vocal prowess of singer/bassist Sera Timms, also of Los Angeles dark-psych alchemists Black Math Horseman. The compositions are the long-simmering mental fallout of veteran music and film journalist J. Bennett (guitar/backing vocals), who has spent most of the last 13 years writing for such publications as Decibel, Terrorizer, Revolver, Alternative Press and Thrasher. The third and final corner of the triangle is Kelly Johnston, whose martial drumming techniques and soaring backing vocals literally brought IDES OF GEMINI to life as a performing entity.

Last year, Timms and Bennett recorded and self-released IDES OF GEMINI’s four-song EP, The Disruption Writ, which was anointed “My Favorite Demo of 2010” by the highly influential music blog Invisible Oranges. Lyrically, the songs detailed the terrifying permanence of dismemberment in all its unsettling forms: psychological, emotional and physical. Musically, though? Someone on the Internet called it “dream doom.” Nobody likes to be pigeonholed, but IDES OF GEMINI will gladly take up temporary residence in that particular nook for the sake of shorthand. Which is to say that “dream doom” will do the trick for now. And now is nothing if not fleeting. Mostly because IDES OF GEMINI are about to record their full-length debut, set for release via Neurot in the Spring of 2012.“It’s all about that moment—that moment when a piece of music comes seemingly from nowhere and is exactly what you were looking for, but you didn’t know it,” says Neurot boss and Neurosis guitarist/vocalist Steve Von Till. “I remember the moment when Ides of Gemini warped my brain. I received an email from Scott Kelly in May. The subject heading was simply, ‘J. Bennett’s band is killer!’ and had a link. I had known J. for a while as a stalwart supporter of all that is good and heavy out there, but I had no idea he made music. I clicked the link and was completely hypnotized for the duration of the demo. As soon as it ended and I realized I had been completely captivated, I replied to Scott’s email: ‘Totally fucking killer.’ Then I immediately emailed J. and told him how awesome I thought it was. A few conversations later, and we were working together. It was beautiful and meant to be. Ides of Gemini is amazing!”
“We’re not religious people, but getting the nod from Steve Von Till and Scott Kelly is like getting onstage only to find Moses and John The Baptist in the front row, wearing your band’s t-shirts,” Bennett enthuses. “And we don’t even have shirts yet, which makes it all the more incredible. The point, though, is this: The impact Neurosis has had on our psyches over the years is immeasurable. ‘Honored’ doesn’t quite cover it. But before anyone gets too excited, I should also probably mention that we sound nothing like Neurosis.”

IDES OF GEMINI will make their Northern California debut at the Oakland Metropolitan Operahouse on October 15th as part of the Blood, Sweat + Vinyl Music & Film Festival alongside Bay Area greats Oxbow and Evangelista. The night will also mark the DVD release of filmmaker Kenneth Thomas’ new documentary, Blood, Sweat & Vinyl: DIY in the 21st Century, which highlights the music and inner workings of three of the finest independent labels currently in operation: Hydra Head, Constellation, and—you guessed it—Neurot.

2/3 of IDES OF GEMINI—Sera Timms & J. Bennett—will also be performing a rare cover song on Oct. 20th as a part of Murder Ballads, an annual event sponsored by the L.A. Record and held at the Echoplex in Los Angeles, featuring artists reinterpreting homicidal folk songs of old.