What I Heard This Morning: This Town Needs Guns 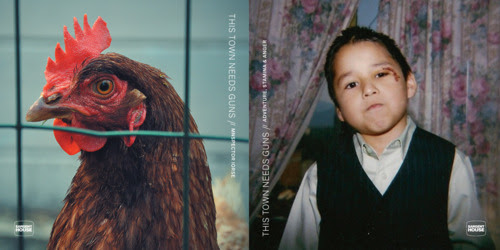 "Animals sees the Oxford-based indie kids take care of the wizardry, combining math-rock time signatures, intricate guitar / bass tapestries and a rip-roaring vocal that swoops above the virtuoso sonics like a musical trapeze artists. The tracks themselves retain a fine balance between the intellectual and emotional, the cerebral and the visceral." -- Rock Sound

"This Town Needs Guns sound stylish, sussed and like reformed mathcore men Minus The Bear covering seminal Mancunian miserablists The Smiths. Good, in other words." -- Kerrang

Oxford, England quartet This Town Needs Guns release a new 2-song 7" today via Sargent House. It is the band's last recording with singer Stuart Smith, who leaves the band on amicable terms having successfully auditioned for fatherhood. The rest of the group is currently at work with new vocalist/guitarist Henry Tremain on the followup to their 2009 album, Animals. The new disc, produced by Ed Rose (Appleseed Cast, Get Up Kids) will be released by Sargent House in 2012.

Stream the new two song release, "Adventure, Stamina & Anger" and "Mnspector Iorse" HERE. The EP cover art is the result of a photo submission contest the band held, in which fans contributed a wide variety of their own images from which the band would choose two favorites. The two seen above on the 7" sleeve are the winning entries.

Oxford is home to the oldest University in the English-speaking world, but more recently has been acknowledged as a musical hotbed with a habit of producing some of the most vital bands around today (Radiohead and Foals, to name a few). Their latest export is This Town Needs Guns, a band being hailed as the darling buds of the thriving UK indie scene.

"Adventure, Stamina & Anger" is available now on 7" single and download via Sargent House. 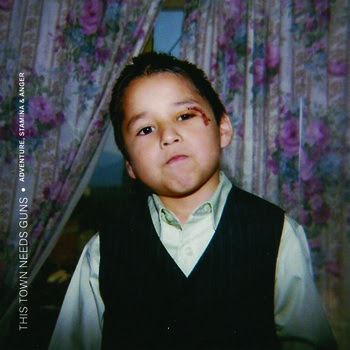