Driving home yesterday, I was listening to Beauty Pill's The Unsustainable Lifestyle, which is the last LP they released before this upcoming 2012 album that I'm very eager to hear.  Some info regarding their recent living art/recording installation at Artisphere and a record release party has surfaced, so I figured I'd post some info for anyone living in the D.C. area and also post a song.

Following Washington, DC Beauty Pill's groundbreaking summer 2011 open recording residency at Artisphere, the Immersive Ideal project returns with a multimedia installation designed by Kelley Bell and Stephan Moore from Saturday, January 7 to Sunday, January 22. Visitors will have the opportunity to listen to Beauty Pill's new album—recorded in full view of the public eye at and presented exclusively at Artisphere—while immersed in the photographs that document the band's experiment in radical artistic transparency. 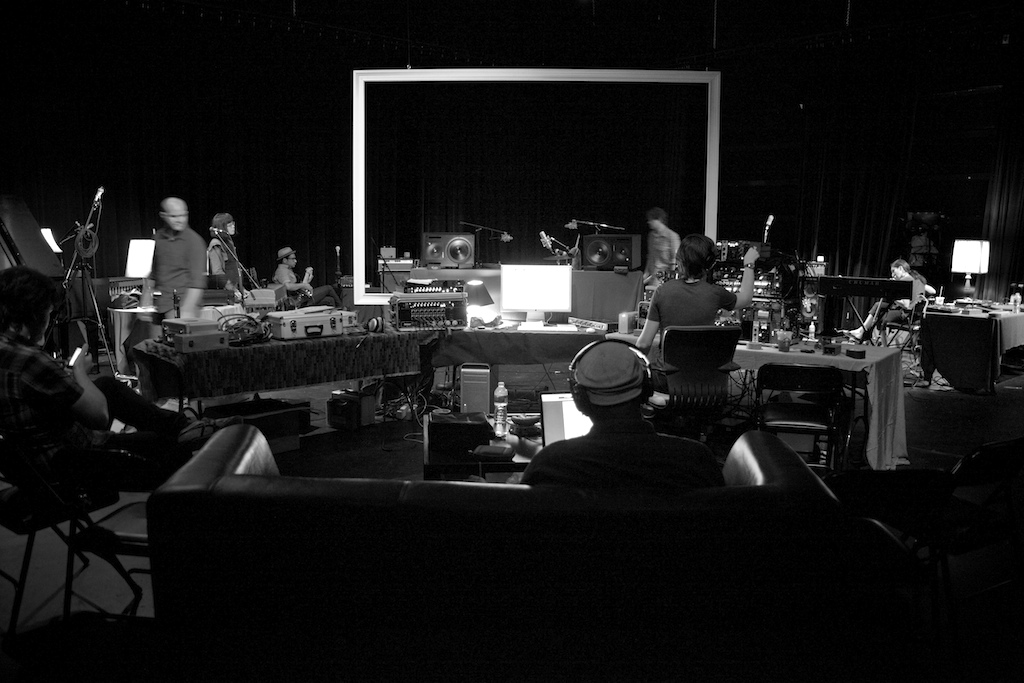 The installation will feature a user-interactive, monome-controlled (www.monome.org) array of photographs from the recording sessions by Nestor Diaz, Morgan Klein, Brian Libby, Jon Pack and PJ Sykes. The monome is a wooden box that holds a grid of glowing buttons. It is beautiful and basic, but also mysterious. It is a purely creative device. What it is and what it does is up to the user. Its simple, soothing exterior belies the fact that is one of the most innovative designs of the 21st century (recently honored by MoMA as such).
“The monome is a zen koan in physical form,” states Beauty Pill’s Chad Clark. “Its marriage of technology and tactility is ideally matched to Beauty Pill's musical aesthetic. It's one of the instruments we use to make music, so it made sense to put it at the heart of the installation. We're all about feel.”

Not content simply putting out a record, Beauty Pill embarked on the first half of the Immersive Ideal project, an onsite recording residency from July 16-August 2, 2011 in Artisphere’s Black Box Theatre. The upcoming installation will also run in the Black Box, furthering the intimacy between the viewer/listener and the work. The band’s current line-up includes multi-instrumentalists Basla Andolsun, Chad Clark, Jean Cook, Drew Doucette, Abram Goodrich and Devin Ocampo.

The Immersive Ideal project and the partnership with Beauty Pill underscores Artisphere’s continued commitment to provide opportunities for artists and audiences to experiment and serve as a forum for new ideas. “Artisphere is thrilled to have Beauty Pill back for the second half of this artistic experiment.” says Artisphere's New Media Curator Ryan Holladay and one half of electronic music duo Bluebrain. “All of our patrons and Beauty Pill fans who came and looked in on the recording as it was happening can now see, hear and interact with the finished project. This has been, and will continue to be in its final iteration, one of the most amazing windows (literally and figuratively) into how an artist works.”

Installation designer Kelley Bell's animated work has appeared in and literally on Baltimore City in two series of public guerilla-style projections: White Light, Black Birds and Rise and Fall of the Land of Pleasant Living. These projects compared the benefits and downsides of urban development through imagery and animations projected on specific sites facing transformation (or destruction) due to economic and cultural factors. Bell’s animations have been screened locally and as far away as Berlin, Germany. Screenings include the American Visionary Arts Museum, the Annapolis Film Festival, The Transmodern Arts Festival and the University of Maryland College Park. She was a recipient of the Maryland State Arts Council Individual Artist Award in 2004, and a semifinalist for the Sondheim Art Prize in 2010. She holds an MFA from the University of Maryland, Baltimore County in Imaging and Digital Arts and a BFA in Graphic Design from Pratt Institute.

Installation designer Stephan Moore is a composer, performer, audio artist, sound designer and curator based in Brooklyn and Providence. His creative work currently manifests as electronic studio compositions, improvised solo performances, sound installation works, scores and sound designs for collaborative performance pieces, and sound designs for unusual circumstances. Evidence, his long-standing project with Scott Smallwood, has performed widely and released several recordings over the past decade. He has created custom music software for a number of composers and artists, and has taught workshops and numerous college-level courses in composition, programming, sound art and electronic music. He curates the annual Floating Points Festival at Issue Project Room in Brooklyn, where he also serves on the Art Advisory Board. From late 2004 to mid-2010, he performed over 250 concerts with the Merce Cunningham Dance Company, serving as their sound engineer and music coordinator, and as a touring musician.

Nestor Diaz is a DC metropolitan area concert photographer and musician whose work has appeared in DCist.com, SPIN.com, Rollingstone.com, and Pitchfork.com.

Bay area-based photographer Morgan Klein is an autodidact with a proclivity to natural light and analog saturation, a penchant for capturing people in their element, and for whom photography is a way of seeking beauty in everything and remaining involved and detached concurrently.

Brian Libby is a writer, photographer and award-winning filmmaker living in Portland, Oregon. His work has been published in The New York Times, The Atlantic and the Christian Science Monitor, among others.

Jon Pack is a photographer based in Boston, a town so nice they named it bean.

Richmond-based PJ Sykes started off playing music before picking up a camera. His photos have been used by bands like Superchunk, Lambchop and The Walkmen.