If anyone happened to survey last week's Top 100 Debuts List for No Ripcord, then you probably had as many issues, (if not more), as I had.  First off, most 00 releases haven't been in circulation long enough to make any lasting impact.  Secondly, Sabbath was beat out by The Arctic Monkeys and Coldplay.  Do I need a third reason after that?


And, because many of the writers felt certain albums that they'd voted for basically got cancelled out for inclusions like James Blake, Neutral Milk Hotel and Fleet Foxes, No Ripcord added an honorable mention feature as a companion piece.  I felt particularly bummed that Fugazi's Repeater hadn't made the cut, so here is a word or two in honor of one of the strongest debut albums of all time.  In my opinion, of course. 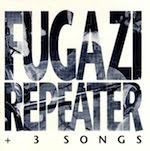 Fugazi released two EPs before their first full-length in 1990, Repeater. Preceding the Alterna-splosion by only a year or so, not to mention all the faux-tortured angst and anti-industry posturing that followed, Fugazi remained true to their convictions, refusing any and all association with the major labels, keeping their door prices very modest (Eat shit, Pearl Jam) and only utilizing all-age venues for their gigs. In the face of their philosophies, though, (“We don’t have to try it and we don’t have to buy it!”), Fugazi’s music is often overlooked, Guy Picciotto’s very passionate vocal and Ian MacKaye’s authoritative tone playing against the band’s post-hardcore idiosyncrasies. Funk-driven and propulsive, melodious while abrasive, songs like the album’s title track, Merchandise, Greed and Styrofoam illustrate Fugazi’s tendency to be a tad preachy. But then songs like Turnover, Blueprint and Shut The Door add a very emotional angle to their craft, a unification of creative ideas brought to fruition in the wake of Rites Of Spring, Embrace and One Last Wish. Repeater would begin one of the most fruitful, distinguished and consistently unique discographies to emerge from independent music, Fugazi’s true brilliance in its refusal to cater to any whim or compromise their creative vision.  (Sean Caldwell)