Earth: His Teeth Did Brightly Shine

- January 12, 2012
Earth’s upcoming sequel to their very excellent 2011 release, Angels Of Darkness, Demons Of Light I, will be out February 14th. Spin Magazine (“Stop trying to be relevant.”) has posted “His Teeth Did Shine Brightly,” which is the second track from AODDOL II. What you hear is a sense of expansion in terms of play and less repetition, improvisational tendencies taking more of a role in Dylan Carlson’s rather epic, dirt-encrusted musical tundra.


Angels Of Darkness, Demons Of Light II will be reviewed at Stereokiller in the coming weeks. In the meantime, listen to the song and absorb some of the info on the album which has been generously provided by the great people at Earsplit PR.

Angels Of Darkness, Demons Of Light I was reviewed in 2011 at No Ripcord. 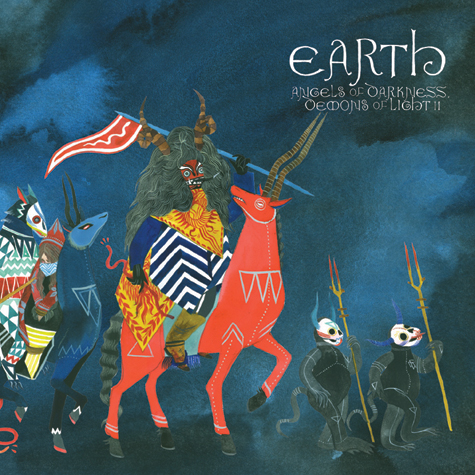 Following the release of EARTH's praised Angels of Darkness, Demons of Light I -- released by Southern Lord in February 2011 -- the public's first chance to hear a number from the 2nd installment of the series has arrived.

While conceived in the same sessions as the first installment, recorded by Stuart Hallerman at Avast and mastered by Mell Detmer, Angels of Darkness, Demons of Light II invokes even more improvisational and unrestrained energy than its predecessor. Traces of this progression are evident in the track "His Teeth Did Brightly Shine" -- the second song from the upcoming album -- as premiered worldwide today by Spin Magazine at this location.

Angels of Darkness, Demons of Light will be released by Southern Lord in North America on February 14th via CD, 2xLP and digital download.