What I Heard This Morning: Cocks Arquette 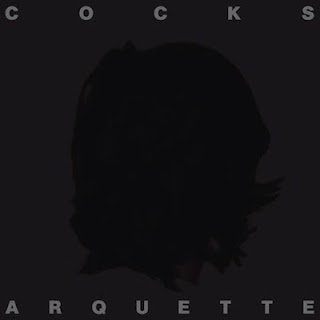 Percussively rampant, sonically caustic and lengthy, the externalized and distorted abstraction that comprises the four songs of Cocks Arquette's debut album is, for me, fascinating to hear.  Recorded live, the band's September 7th release investigates the noise/aggro combos that seemed to define Mi Ami's pre-electronica output, one cyclical mode of conveyance acting the foundation to layered experimentalism and built out intensity.

The album is introduced by the less than a minute "Considerably Fucked," which is Boredoms' styled nonsense that leads into "Pointlessly Vindictive," a No Wave-sized rut that flirts a tad with math rock, ambient tones and free jazz.  The approach is coarse and possibly as vindictive as its title suggests.  The Tangerine Dream on quaaludes approach to "This Changes Nothing" eventually gives way to a thundering Sonic Youth-tinged surf track replete with pulsars and atmospherics.  Its last three minutes is devoted to snare taps and light guitar.  The album's final track, "Then Leave," begins with dark environs and transitions into Electric Wizard sludge.  It's pretty awesome.

All info and links come courtesy of Earsplit PR.

Witness some visual documentation of all five members laying down the riffage AT THIS LOCATION and stream the entire album at the COCKS ARQUETTE BANDCAMP PAGE.

After commencing as a two piece continually at war with itself in 2006, operations gradually escalated via constantly varying personnel and equipment arrangements revolving around brothers Simon and David, before settling into a hardened five-piece collective in 2009. COCKS ARQUETTE's soul destroying maximalism quickly solidified -- their "thing" became steeped in terrifying catharsis and meditative pattern repetition at maximum volume; wild and loose in the same shapes over and over again, order out of chaos and all that.

Sincerely,
Letters From A Tapehead
Labels: experimental noise post-punk upcoming release what i heard this morning