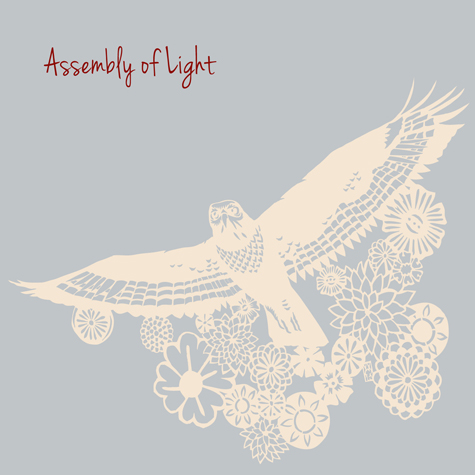 Debut Full-Length Out This Week On At A Loss Recordings

The maiden studio recordings from ASSEMBLY OF LIGHT see release this week via At A Loss Recordings, boasting six ethereal hymns from the twenty-some member female secular choir. Recorded at Machines With Magnets in their hometown of Providence, Rhode Island, the self-titled album features contributions from members of The Body, Braveyoung, Work/Death, Daughters, and more, creating some of the most unique songcraft in recent memory.

As Assembly Of Light is officially available this week, the folks at Cvlt Nation are hosting a stream of the entire album, RIGHT HERE.

The album is now available for order directly from At A Loss on CD HERE and Digital Download HERE.

ASSEMBLY OF LIGHT just returned from an intense West Coast tour with their close friends, and labelmates, The Body and Braveyoung, where all three bands presented their own solo contributions as well as collaborative movements with members of all three bands simultaneously, as they have on previous tours on the East Coast.

Further tour plans will be unveiled in the weeks ahead as the choir permeates new parts of the Earth with their presence.

"All six songs will teleport your whole being into another reality as you fly away on some very ethereal voices.” - Cvlt Nation

"I have never been a fan of choral music but this record really showed me the power of the human voice and the utterly stunning and emotional things it can create. If you give this record a chance I can promise you will be moved emotionally and spiritually. 9/10" - American Aftermath

"The Assembly of Light Choir's collaboration on The Body's All of The Waters of The Earth Turned To Blood are some of the most compelling tracks on the record. The juxtaposition of the all-female choir against The Body's rumbling low-end blasts is a study in eerie contrast, and one that continues on AoLC's debut LP." - Brooklyn Vegan

"They are one of the most interesting and certainly unique group of artists out there, and they are pushing boundaries in ways most metal bands fear. This is a breath-taking, imaginative effort that you might find will break down the walls of your genre fiefdom with the power of a wrecking ball." - Meat Mead Metal

"Although completely secular Assembly of Light definitely have an almost religious reverence in their all-vocals hymns (beginning of Treelight) and could easily conduct a service in some catholic cathedral. Subliminal and meditative, this music projects either the innocence of a human being’s birth or the unbelievable sadness of one’s passing." - Metal Reviews