"If I had a fucking knife, I'd cut my head off right now" — Swans Are Live

Swans
We Rose From Your Bed With The Sun In Our Head
Young God Records
Released: 5.8.12 (Proper release; Limited handmade edition released 2.2.12) 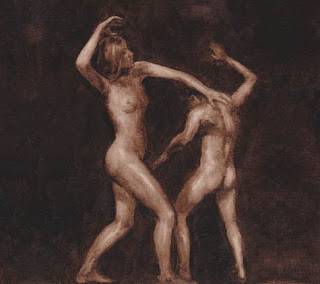 The jogging clangor, a shower of bells and piano notes, percussive ringing tapped in rapid succession...  It's almost as if Michael Gira, head of the No Wave, Industrial legends-turned-high art collective Swans, sought to weed out the non-believers.  The frequency heightens, the music turning to screeching shrieks which then settles a tad just before "No Words/No Thoughts" is beaten into the foreheads of every man and woman in attendance.  Track 1 is over 23 minutes long, the first 13 minutes an introduction to the show as described above.  The applause seem polite, as if the crowd had been shocked into clapping.

It would be too easy, though, to report of or point out the obvious over-length of Swans' double live album, We Rose From Your Bed With The Sun In Our Head, so I won't.  If you know the band and you buy the album, you know what you're getting into.  You realize that this is not just an album, but an artistic investment.  You realize that by listening to Gira and his ensemble, you are devoting yourself to something fantastically huge that will likely stretch your tolerance to its threshold.  You realize you are opting, (mindfully and willingly opting), to have the contents of your head removed and rearranged by an album.  Gira has a penchant for building up suspense and you have elected to await the arrival of a full-blown and difficultly won money shot that arrives only sometimes.

We Rose From Your Bed With The Sun In Our Head was, in its first iteration, a handmade release limited to 1,000 copies that ranged in price anywhere from $30 to $600.  It was a way for Swans to meet the rising cost of recording their now upcoming new studio double-LP, The Seer.  There were, of course, novelties to go along with the purchase depending on which package you selected, some being genuine artwork from Gira.  One of the options even promised a personalized acoustic song, praising the benefactor by name.  Their enticements must've worked, because every copy was sold within 24 hours. WRFYBWTSIOH has since been released as a proper album and it stitches together performances from Melbourne, Australia, Berlin, Germany and New York City, which were recorded while the band toured for their 2010 release, My Father Will Guide Me Up a Rope to the Sky.

Swans dwells in the mire of their sounds, ornaments and embellishments decorating moments of cycling battery ("Beautiful Child") or enhancing trails of dissonance ("93 Ave. B Blues").  Their roots firmly planted in New York's abstract eruption of No Wave music in the early 80s, Swans remains a strange and abrasive sort of art rock presence fascinated with its own noise.  There's a sophistication to Gira's extremes, the industrialized and inaccessible aspects of the band's past now bred into this cultured mix of symphonic propulsion and wandering composition.  Their approach walks a fine line between self-indulgent tenacity and high minded expression, both of which require some patience from the listener, especially if this person isn't well-versed or somewhat acquainted with the music of Swans.

Gira pours himself into his performances like a tent revivalist, jumping on every syllable, chewing the theatrical scenery with the "JEEEEEEEEEEZUS CHRAAAAAAAAAST!"'s provided by "God Sex God," or the very pronounced declarations of "I HAVE A BYOOOUTEEEEFUL CHYLLLLLLD!"  It's over-the-top, but hard to dismiss or accept with a humored nonchalance.

While WRFYBWTSIOH offers a very well-produced and performed facsimile of a live show for its listeners, the album also offers somewhat of a sales pitch for The Seer, some of its material having been written while Swans toured.  "The Apostate," for instance, is heavily percussive and rhythmically circular.  "The Seer" is a cacophonous harsh that muscles its way to "I Crawled" medley-like, given some body through a thudding bass line (Christopher Pravdica) and rattling percussion (Thor Harris).  "93 Ave. B Blues" is an aimless mass of guitar runoff with an incidental and sporadic drum beat that precedes "Little Mouth," which finishes the album.  Gira offers a gentle "thank you" and the applause become silent.