It's Called a Cymbalum: Asva and Philippe Petit

Sunn O)))'s White 1 album begins with "My Wall," a 25-minute soundscape narrated by Julian Cope.  His poem is flamboyantly articulated as charred and faraway sonic shards of guitar effects haunt and gasp, close to melodic chords pierce the mire like wind chimes.  It was the first piece of music I thought of when I began listening to "And Empires Will Burn," the opening track from Empires Should Burn…, a collaborative effort from Asva and Philippe Petit. 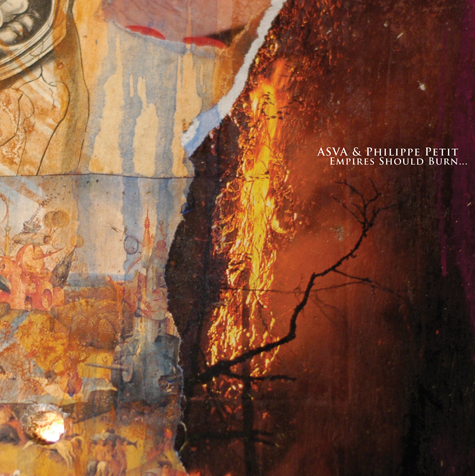 The rotating static of a spent LP and the swelling whirr of unknown means accentuate Edward Ka-Spel (from The Legendary Pink Dots) as he relates, "Just how many days and nights have passed now?  There are no clocks in this room."  A cycle of winding notes that sound like a broken harpsichord advances, (evidently the sound of a cymbalum, which compares to a dulcimer), a rather eerie 23 minutes acting as the album's introduction.

In light of what you'll hear for the length of Empires Should Burn…, it's not surprising that Asva is the work of G. Stuart Dalquist, formerly of Goatsnake and Burning Witch.  Philippe Petit is an electronic artist that deals in circuits and turntables, samples and percussion, synthesizers and strings.  Empires Should Burn… is a study in textures and compositional mood.  A piece of theater like "Sweet Dreams Asshole" assumes the job of performance art almost.  As pretentious as that sounds, the piece warrants a reaction, either through its claustrophobic vocal drones which seem to build walls of inescapable height, or through its eerie howls and distant bells.

Performance artist Bryan Lewis Saunders provides whispered testimony in "A Vision," which toys with melancholia and abruptly struck piano keys.  Ex-Swans vocalist and instrumentalist Jarboe contributes some phrases for "The Star Implodes," a suitable role considering her past work.  Jarboe's presence is perfect for this album as her spoken tone compliments and dominates the ambient strangeness around her.

"Apocrythatic Alley" ends the album with a nervous and bitter tone, a simulated pulse and organ-notes-as-requiem feel.  It's relatively soft and meditative, and it allows an underlying gorgeousness of guitar and piano notes to grow subtly, a structural melody taking shape just as the album fades to a close.  The sweetness is just out of reach and you wind up resigned to accept that Empires Should Burn... is just not the venue for that kind of pleasantry.

Sincerely,
Letters From A Tapehead
ambient experimental the mailbox giveth