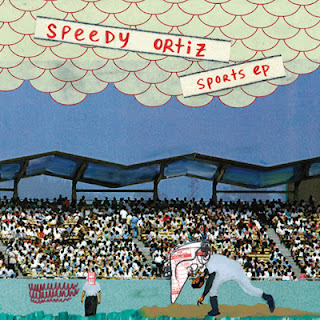 The Northampton, MA based Speedy Ortiz is a 90s allegiant rock quartet based in the guitar rock and Alterna-pop'dom of the era.  Appealing to the once flannel-clad set now subsisting on nostalgia, Speedy Ortiz, whose members include singer/guitarist Sadie Dupuis, guitarist Matt Robidoux, bassist Darl Ferm and drummer Mike Falcone, have released Sports, a five-song EP synthesizing the more hook-savvy aspects of The Pixies or The Breeders and some of the distorted power pop and anti-melody of Sebadoh.

Dupuis, holding her own amongst 90s female rockstar alumni like Liz Phair, Juliana Hatfield, Tanya Donelly and Kim Deal, delivers pretty and unpolished testimony, her verses dealt in winningly profane and suggestive modes of conveyance.  The music itself makes one miss the days of early 90s episodes of 120 Minutes, Speedy Ortiz convincing enough to have themselves made an appearance or two.  I can't deny having had a couple flashbacks, Sports feeding into some unconscious need to reminisce.  I spent much of today looking up old 90s videos on YouTube and feeling old.

Three of the five tracks deal in sports, first being the nicely crafted "Basketball," which is an engaging mid-tempo tune employing the Pixies' tried and true act of dialing up the hook, Dupuis and Robidoux lightly playing off each other till it's time to howl.  The more serious, tom-thumping "Indoor Soccer" is carried off by some really nice guitar melodies that give way to a series of amplified blasts.  "Don't you let down/my good friends don't/you fuck with my pals," Dupuis warns, chords being worked in an effort to heighten the seriousness of her tone.

"Curling" is a rock dirge with chugging and crunching rhythm guitar strings played beneath tinny lead notes generating an affecting melody.  The following song "Silver Spring" holds up the softer edge of the band initially, propping up their return to loud hooks and heavy guitar chords.  "Suck Buddies," probably the least accessible song on the EP, goes out in a very welcome array of Sonic Youth-friendly atonal shredding, ending their outing with extended play, moments of loud and, ultimately, a solid riff to bring it all to a close.

I will say, though, that the 90s don't require an homage or revival.  While I realize and understand the cyclical nature of trends, it would be good to experience the 2010s as free of revivalists, the 90s better suited as a point of inspiration rather than a decade to pull back into relevance.  As much as I enjoy what the 90s had to offer, (not all but some), I think new generations need their own alternative identity, not the runoff that Gen X has since abandoned like their babyboomer elders had before them.  Honestly, this decade can do better than Fun, especially when capable bands exist to possibly provide some salvation from mediocrity.