- September 25, 2012
On November 20th, MVD Entertainment Group will be releasing Color Me Obsessed, a new documentary about The Replacements.  Directed by author/filmmaker Gorman Bechard, Color Me Obsessed will be the first documentary to detail the history and the lasting importance of the band.

The Replacements Color Me Obsessed comes to DVD on November 20

One of 'The Seven Best New Music Documentaries of the Year' - David Browne, Rolling Stone 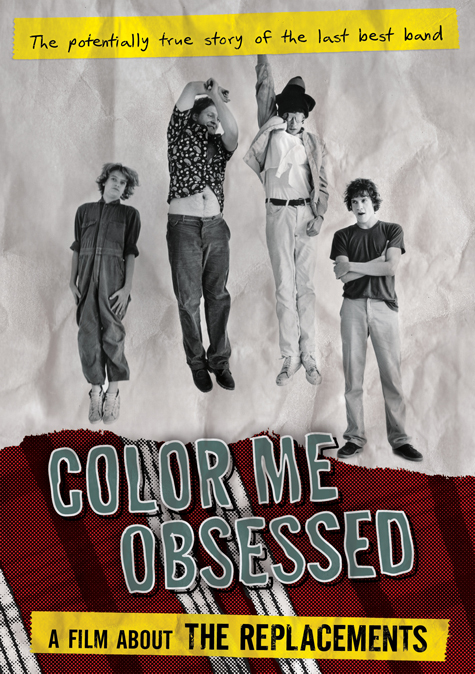 COLOR ME OBSESSED, the first documentary about famed 80's indie-rock band The Replacements,will be released in a two-disc DVD set (with 6 hours of extras) on November 20 via MVD Entertainment Group.

Told through the eyes of fans, friends, and contemporaries, COLOR ME OBSESSED breaks from the traditional music documentary format of music and performances. Not looking to make a VH1/where-are-they-now style documentary, director Gorman Bechard took a unique approach, "I decided to present the band in a more iconic way," he explains. "I thought, people believe in God without seeing or hearing him but rather through the passion, faith, and stories of others. After watching COLOR ME OBSESSED, I'm pretty sure music fans will believe in The Replacements in much the same way."

Telling the band's story was a project close to the heart for Bechard. Like many who were weaned on punk music he latched onto this brash young Minneapolis band with fervor. Dubbed "the last best band" by Spin Magazine, their live shows could be miraculous or downright disasters. Their fans, unwaveringly faithful. As critic's darlings, their albums were wrought with angry guitars and passionate well-written lyrics that hinted at potential commercial success. Yet, somehow, the band managed to continually shoot themselves in the foot. Their relative obscurity was a motivating factor in presenting their story on film. "The Replacements should have been the next Rolling Stones," Bechard says, "And to the people who loved them, I think they were."

Combining over 140 interviews with rockers (Colin Meloy of The Decemberists, Craig Finn of The Hold Steady, Tommy Ramone, Grant Hart and Greg Norton of Husker Du, all three members of Goo Goo Dolls), journalists (Robert Christgau, Legs McNeil, Ira Robbins, Greg Kot, Jim DeRogatis), and fans both famous (Tom Arnold, Dave Foley, George Wendt) and not, Bechard delivers the obsessive tale of the most influential band you've never heard of, The Replacements. And though containing not one note of their music, COLOR ME OBSESSED is a documentary that really rocks.

Bechard is also releasing his Archers of Loaf reunion tour/concert documentary WHAT DID YOU EXPECT? on November 20. The film features the Indie rock icons playing two hometown concerts at Cat's Cradle in Chapel Hill, NC. It premiered at NXNE in Toronto in June.

DIRECTOR'S BIO:
Gorman Bechard is the author of seven novels, THE SECOND GREATEST STORY EVER TOLD, UNWOUND (under the pseudonym Jonathan Baine), NINTH SQUARE, GOOD NEIGHBORS, BALLS, THE HAZMAT DIARY, and the up-coming NOT SO PRETTY. He directed/co-wrote the indie features FRIENDS (WITH BENEFITS) (2009) and YOU ARE ALONE (2006), THE KISS (2003, starring Eliza Dushku and Terence Stamp), the horror comedy cult-classic PSYCHOS IN LOVE (1986), as well as the award winning shorts OBJECTS IN THE MIRROR ARE FURTHER THAN THEY APPEAR (2003) and THE PRETTY GIRL (2000).

Bechard has just completed a dark drama about internet modeling entitled BROKEN SIDE OF TIME, the second part of his planned ALONE trilogy. He is currently working on part three, a horror film entitled ONE NIGHT STAND. He has also begun shooting PIZZA, A LOVE STORY, a documentary on the holy trinity of pizza joints, the legendary Sally's Pepe's, and Modern, in Bechard's hometown of New Haven, Connecticut.